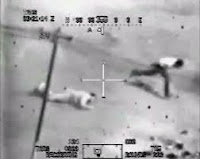 One of the things I learned early in life is that doing the right thing almost always carries with it a price.  Sometimes that price you pay can be terrible; you can pay a very dear cost for doing what you should rather than what you want or what temptation would have you do.
This is the truth of war that too many people cannot seem to understand.  Almost everyone sane understands that, as General Sherman pointed out, war is "sheer hell," that it is a horrible, painful thing.  Soldiers know this more than anyone, and almost every soldier will say they fight not to win the war but to earn peace and get back home safe.
The album American Soldier is a magnificent album by Queensrÿche, an examination of what it means to be a soldier at war without a distinct, specific point of view.  You hear interviews from the men, telling what they believe and why they fight, how they see things, but the songs are just about what happens, not promoting anything.
The song "At 30,000 Feet" is from the perspective of a bomber pilot, flying so fast and so far above the heads of the enemy, cloaked by stealth that he's immune to them, invisible.  Its about what its like to deliver death and fire on targets below, targets who cannot escape him and cannot fight back.
The song tells of the almost clinical detachment from his targets, wrapped in incredible technology, all alone hearing only the sound of his breathing and delivering death below that he'll never hear or see.  He tells of the complaint of the enemy "show your face!" and answers "what about the faces of the women you dominate and enslave?"
Warriors go away from war feeling not like heroes and saviors but as men who saw, delivered, and experienced hell.  They usually don't like to talk about it, don't like to remember it.  They feel that burden on their souls as long as they live, all the lives they took, all the things they did. I try to express that in my books, no Conan mowing down enemies with a shrug, but men who feel what they've done, even though it was what they had to do and was right. Because it this life, when you do what is right, there is always a cost.


Whatever happens now
Is beyond my control.
Emotion has abandoned me.
Faded away and left me…cold.

The call’s been made.
I’m here, dependent on the atmosphere
Contained inside this mask I wear.
My breathing is all I hear.

I see it all so clear…
At 30,000 feet above the enemy.
No one can see me.
Press execute.
I’ll send the “Pigs” away.
The tortured painful cries
Will never fall upon my ears
And never stain my elder years.
My heartbeat is all I’ll feel.

Over the rooftops of the city the word
Travels fast from cell phone to cell phone.
“They demand to see their faces!”
“Of the women…hidden behind the veil?”

This is part of the Songs I Like series.
Posted by Christopher R Taylor at 12:43 PM