"I think Google should be like a Swiss Army knife: clean, simple, the tool you want to take everywhere."
-Marissa Mayer

So its that time of year again, time to renew my Google domain for this blog.  Its pretty cheap and I actually have some cash I can pay for it with.  It used to be around Christmas but that was too much conflict for my limited budget, so I moved it up a bit.
Previously its been easy, Google sent an email saying "you're running out, click here to renew."  Not this year.  Google has been juggling around all their various business and web options like adplus and so on, trying to get them all under one umbrella.  Now its called "Google apps" as if everything you do online is on an Ipod.
Hey Google, if its on a computer then its called a program.  Despite what you may think, most people use their computer to browse the internet  Yes, we've been told for decades that the desktop is dying out, but it isn't, there still are hundreds of millions of the things out there - billions maybe - and people still use them for all sorts of things.
At any rate, I got an email telling me that my domain is about to expire, in a few days in fact.  So I tried to renew it.  But there's no link to do so in the email.  It just tells me to log into Google Apps to renew.  Stop reading and type "google apps" into GOOGLE and see what you get.  Which of those do you suppose I want for my little blog domain?  Do any of them stand out?
Why in the name of God on high wouldn't the email just have a link that I click to go where I want?  Surely people at GOOGLE are familiar with the concept of links you click on to go where you want, given that their entire business is built around this fundamental device of the internet, right?
To complicate matters, I tried to use the browser Chrome to do it.  You know, Google's personal browser called GOOGLE CHROME.  It crashes half the time, sometimes so bad it reboots my computer.  Firefox sometimes crashes, but its never seized up my work system thirty to ninety seconds, then sometimes rebooted.  I tried to get a new version, but I already have the newest version.
So I poked around the Google Apps trying to find anywhere to renew my domain, and it asked me to sign in.  You sign in using your website and a drop down menu has the helpful-sounding option "domain management."  Perfect!  So I hit the "sign in" button and it asks me not to log into my google account, but some entirely new account I've never even seen before, based on my domain name.  It wants this: 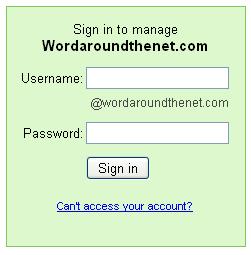 Never in my years of using blogger and Google have I ever created any account of any kind which is like this.  I have never been given, nor seen a username attached to my WordAroundtheNet domain name.  When I use their "I can't remember my user name" option, it sends me to log into ordinary google account like I do to get into my blog innards.  Then when I try to get on to Google Apps... it asks the same thing, which I do not have.
I tried my name, I tried my login, I tried my usual password, nothing works, this site is looking for an account which does not exist.
So I search for help on this and get... ads for godaddy and other domain sites, and I had to screen out several words to finally get to GOOGLE on their own damn search engine.  And none of the help was of the slightest assistance in any remotest sense.
I still don't know how to get to renew my blog.  Its not on the blog controls.  Its not in my google account.  I can't find it anywhere, except in that one area, which asks for a login I DO NOT HAVE.  Now I'll eventually get it done, I'll some day figure out how to get where I need to go.
But upon what possible planet did they think this was a good way to manage their accounts?  Who at Google was the inbred retard that designed this?  Were they just really stoned when they set it all up?  Was it done by a committee of people each of whom speaks a different language exclusively?  Was it given to a room full of monkeys with typewriters to code?  I really want to know, these aren't rhetorical questions.  I want an answer to how on earth something so simple and necessary to make the company money was made so idiotically complicated and unusable.  I really do.
Posted by Christopher R Taylor at 12:02 PM