"It's simple, if it jiggles, it's fat."
-Arnold Schwarzenegger


Boy Americans are fat, what a bunch of tubby losers those Americans are.  Why, they're all so fat its an epidemic, their president's wife says its a crisis and is fighting for kids to eat better!  Disgusting they are, Wal*Marts full of disgusting fat bodies all across the land.  Every comedian, every online kid, every European all has the same batch of jokes and lines.  'Murica!  Land of the fat lazy slob!
Especially in the rural areas, they're all fat hicks there, not a lean sexy body in the entire country.  Why, a study recently showed that people are fatter in the country than in the city.  You hear this over and over, its a "meme" online of fat 'muricans.  Except... that's not exactly true.
There are a lot of problems with the idea of Americans being unusually fat.  For example, take a look at this listing of nations by percentage of the population considered "obese," by the official standards of the Body Mass Index (BMI):
Now, when you think of fat nations, does Kuwait pop into your mind?  Because according to the BMI, they're fatter than Americans.  And the Dominican Republic is just a little less fat, an island with an image of lean, beach-tight bodies - or underfed people.
And that study of fat hicks in the country?  The percentage differences are tiny: 33% of those in the city, vs 39% in the country.  In other words if you compared 100 city folks with 100 urban folks, six more of the rural guys would be considered obese by the typical standards.  Not exactly a huge margin, even assuming having more weight is some kind of sin.
Still, the official data states that 30% of America is officialy obese.  And that definition is part of the problem. When most people think of the word "obese," they don't picture a few pounds over, they think "bury in a refrigerator crate." So when you use that word and say 30% of Americans are obese, people think this: 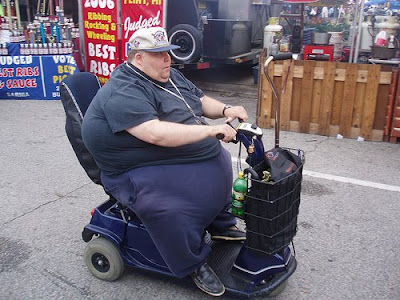 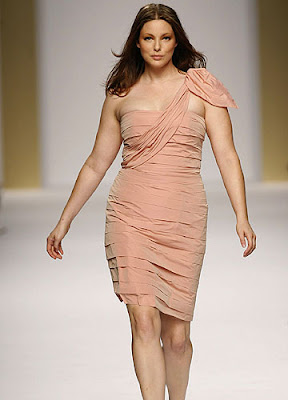 Both are considered "obese" because both have more than a 30 BMI. One is clearly unhealthy and has a problem, the other is curvy and looks darn good. Yet that word "obese" conjures up disgusting images of rolls of fat rather than curves.
According to the Associated Press 5% of Americans are "morbidly obese."  The thing is, "morbidly obese" is defined as more than 100 pounds over weight given the BMI chart. A third of Americans are considered obese, which is defined as any amount over the Body Mass Index BMI's ideal weight level. So that sounds awful, right? Horrendous, immensely fat.
The problem with the BMI is that it doesn't really take into account different kinds of builds, and it has an idealized target weight which isn't reasonable for most human beings. For example I am just under 6'3 and weigh around 200 pounds, give or take 5 depending on how long its been since I ate and whether its Thanksgiving. That gives me a BMI of 25. 30 is considered "obese." In other words, I'm 5 units from being not just out of shape but obese. That's absurd, I am not exactly cut and toned, but I'm not fat by any definition. That's because I have fairly broad shoulders and am built to carry this much weight properly.
See, BMI is just a flat measurement: this height vs this weight.  They don't care about your lifestyle, what the weight happens to consist of, and so on.  It is well known that muscle actually weighs more than fat, so a really ripped athlete would be obese because they have a great deal of muscle weight.  In other words, this guy is obese: 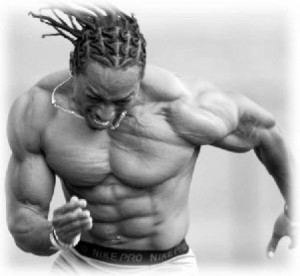 Which is flat ridiculous.  The standards are silly to begin with, but they are virtually useless for truly examining who is overweight and who is not.  And when you base your consideration of nations on a flawed index, you can't even begin to make a case.
The thing is, its silly to think Americans are especially overweight anyway.  I mean its not like there aren't heavy people from the Netherlands, United Kingdom, Japan, and other nations - quite a few, in fact.
The truth is, if you look at the World Health Organization's data estimates that 30% of the entire planet is "overweight" by the Body Mass Index standards.
In other words, the standards are flawed, America isn't even particularly overweight even if they were accurate.  Are there people who need to lose weight?  Certainly.  And they live everywhere around the world.
This is part of the Common Knowledge series: things we know that ain't so.
Posted by Christopher R Taylor at 11:53 AM