"Back home everyone said I didn't have any talent. They might be saying the same thing over here but it sounds better in French."
-Jerry Mulligan 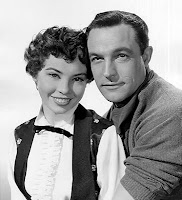 I try to watch classic and beloved movies, to catch up to ones people have long enjoyed which I've missed, such as Jaws (it was okay, although Roy Scheider is an overlooked genius of an actor).  Generally speaking, big movies and films which have endured for decades are excellent and worth seeing, even if they're a genre you don't care for.
So while I was at the Oregon coast last week, I watched An American in Paris, with Gene Kelly and Leslie Caron.  It was a pretty fun movie with some absolutely spectacular dancing and set design, good songs, and one astounding concert performance.  I do like George Gershwin's music, and Gene Kelly is absolutely at his finest dancing form so it was spectacular.
This film is essentially just a showcase for Gershwin's songs and Kelly's dancing (as well as Caron).  The French singer played by Georges Guétary had an amazing voice as well.  It was the big musical spectacle reduced almost totally to its core elements of music and dance, with very little plot or dialog.  In a way, this is the ultimate musical, with no pretense of being anything else and designed to be nothing but songs and dancing with a weak story to prop it up.
That doesn't make the movie any less entertaining, if anything it may be more so as a result.  And it is a classic because of that - and because of the amazing end dream piece which was a sort of ballet in a strange surreal setting of Parisian images.  This section was offered instead of any explanation to why Leslie Caron's character Lise Bouvier leaves her fiancee for Gene Kelly's Jerry Mulligan.
Really, you don't need to know why because you can imagine the conversation in the car based on dozens of previous movies and the story.  And here's where I had a problem.
The movie is this great sweeping romance with wonderful music and beautiful people, and Gene Kelly is at his absolute most charming.  You just get pulled into the story and ride along, and its not unusual to see ladies crying at the end because its just so romantic.
And were this not such a show piece rather than a serious attempt at telling a story, I'd hate it.  Not because of the romance, but because of the way the story plays.  Strip out all the setting and the songs and the dancing and so on and here's the basic story:

Girl is engaged to a guy, but when a handsome charming man shows up, she goes out with him repeatedly behind her fiancee's back, doesn't tell either one what she's doing, and the fiancee only finds out by accidentally overhearing the girl finally tell her why she's leaving to marry another man.

Compounding this as a problem, the movie has a nasty flaw that almost all romantic movies and stories do: the girl has little personality or reason to be loved other than being really pretty.
And its odd, Leslie Caron isn't a real beauty, she's not a stunner like Ingrid Bergman or Grace Kelly.  She's cute enough (although she looks half Gene Kelly's Age), but her behavior and the way she reacts, physically, to events and statements is very charming and attractive - she is prettier than she looks, in short.
But even Jerry Mulligan admits "What gets me is, I don't know anything about her. We manage to be together for a few moments and then off she goes. Sometimes we have a wonderful time together and other times it's no fun at all."  And love is like that sometimes; you can't really put a finger on why you love them - at least not without more time and thought.
The problem is, it always strikes me as implausible that the guy is head over heels in love so much he'll sacrifice everything to be with her when all she is is pretty.  That's not enough, and it has to be frustrating for actresses - and it is, from what I've read and heard - that they aren't given any more part than "be pretty."  When you're as painfully gorgeous as Ingrid Bergman that can work, but the truth is, guys like more than a cute face and a hot bod; at least to keep and love.
Leslie Caron's character Lise is little more than a young, cute dance partner who is very pliable.  The writers tried really hard to define her character more in a dance sequence near the beginning of the film, which was charming and well done by Caron who obviously has ballet training at that point, but all she ends up being is a incomprehensible series of contradictions which tells us nothing.
And what makes matters worse is that she's essentially untrue and a liar.  She maintains a double lie, lying to both men without any attempt to set things straight.  Its almost as if the stereotypical Parisian attitude about love is being displayed in the movie.  That love excuses everything, and even if its fake, love is worth doing anything to have.  Georges Guétary's advice to Kelly about telling the girl he loves her follows these lines, telling him to say it even if he doesn't mean it because women fall all over you if you do.
And since hundreds of French books and movies have been made repeating this basic philosophy I have to wonder if it isn't accurate about at least Paris, if not France in general.  But think a bit about the girl: she's engaged to marry one man and runs around with another, and that's supposed to be wonderfully romantic.  Its not like they were just dating a bit, she made an absolute commitment, a promise to be with him alone and is about to be married.
Now, the writers try to excuse this by saying she's young and confused and she was just following through on a promise because Henri saved her life, and so on, but at any point she could have indicated to him that she was having second thoughts and maybe they should back off a bit.  She doesn't, it never even comes up.  Neither man has the slightest clue what is going on, so much so that it leads to a hilarious scene where mutual friend Leslie Caron (Adam Cook in the movie) desperately tries to prevent either from finding out what is going on.
Again, I don't want to be too critical of the film because it is not meant to be taken seriously or examined for deep philosophical implications.  Its a silly fluff piece; a song and dance bit extended into a 114 minute film.  But I couldn't help but get the impression that the reason Henri lets Lise go at the end is because he knew he couldn't trust her.  And if there's one thing you can rely on, its that if she'll leave him to be with you, she'll leave you to be with the next guy.  That's not 100%, and certainly these are special circumstances, but it is something that a guy like Henri would know.
So to me, it didn't have that big swelling romantic heart burster at the end like it was supposed to.  All I could do was see Mulligan being set up for a big fall when the next charming guy came along.  It just didn't have that pop at the end it was supposed to.
Incidentally, Oscar Levant is terrific in the film, and his concert piano scene is astonishing, the man is a genius on those keys.
One final interesting connection: Nina Foch, the rich American lady who collects artists, also played Dr Mallard's mom in NCIS.
Posted by Christopher R Taylor at 9:10 AM