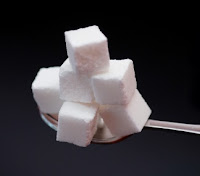 One of the repeated comments I hear or read from visitors to the United States is how sweet all the food is.  They're baffled by the amount of sugar that's added to food and wonder why.  Then, they tend to connect that to the myth that Americans are unusually overweight, for whatever reason.
Americans do eat an awful lot of sugar; the average intake of sugar for an American is 22.2 tsp. of sugar daily, or about 355 calories.  That translates to roughly 77 pounds of sugar a year per person, which is quite a bit.  The problem is its very difficult to avoid this, even if you personally reduce the sugar you add to foods.
There's a great deal of hysteria and misinformation about sugar and its affects on people, how much people eat (the estimates are absurd if you look around, to hundreds of pounds a year in America, etc), and especially about corn syrup, which is no more problem than cane sugar or other types to eat.  But there are other concerns about all this added sugar.
Sugar is packed into all kinds of prepared foods and supplies, and is very difficult to avoid.  As I've noted int he past, I've got a problem with sugar - Sugar Sensitivity, they call it - which makes matters even worse.  People with dietary problems involving sugar fight a constant battle to avoid sweets, such as those with diabetes.  This difficulty is made worse by manufacturers packing sugar into all kinds of foods.
Most food with sugar is easy to spot.  Sweetened drinks such as Coke or Mtn Dew are plainly sweet.  Donuts, pastries, cookies, and so on are obviously sugared, and you expect them to be.  They wouldn't be right without sugar, and those are easy to spot and avoid - in theory at least.
Other foods are a bit less obvious.  I searched around for lists of foods that have a surprising amount or not an obvious amount of sugar in them, and the lists were a bit odd.  They acted as if it was shocking that foods such as honey, pudding, fruit juice, and barbecue sauce had sugar in them.  Its like they haven't cooked in their lives and have no clue how these things are made.  How could you not know honey is sweet?
However there are foods which have sugar slipped in which you might not have thought about or noticed.  Peanut butter, for instance, has sugar added unless you get the very plain raw kind that's just peanuts, salt, and oil.  This is the kind that separates and has to be mixed, and is very basic.  I prefer it, but most people associate peanut butter with sugar, such as brands like Jif.
Manufacturers slip this stuff into all sorts of other foods, most of which you probably haven't even noticed.  Many frozen entrees, even "diet" ones have sugar added, or sweet portions.  Some canned soup has sugar in it, often canned vegetables do.  Even some crackers have sugar in them.  Do you like Wheat Thins?  Pretty good - and sugary.
Sugar is put into almost all salad dressings, even ones that are supposed to be tangy like Italian, or diet.  Almost all "low fat" foods have sugar added to them, I suppose to make up for their lack of other flavor.  The list gets even weirder, the more you look.  Tomato sauce often has sugar added, presumably to counter the acidity of tomatos and other ingredients.  Mayonnaise is almost impossible to find without sugar, and there's no earthly reason to have any in it.  I know Ketchup wouldn't taste very good without sugar, but Mayo?  Really?  Almost all bottled spaghetti sauce has sugar, and even a lot of bread does.  Some bread is so sweet it tastes like cake.
And then there's medicine.  Most cold medicines, including all cough drops or throat lozenges, have sugar in them.  Many kinds of vitamins have sugar coatings or sugary builds (when chewable).  Lately Wal*Mart has started putting a sugary coating on their brand x medicine, such as Wal-Zan.
This is incredibly frustrating for someone in my position because I have to read the label of nearly everything I buy and eat just to avoid the sweets added in.  Its like they are trying to make me ill, a ninja working to slip a little trace of poison into everything.
There's no reason for 99% of the sugar added, its just thrown in there to make things slightly sweeter, which most people respond positively to.  I've done without much sugar for a long time now, and I can taste it almost immediately in many cases.  Its so frustrating, I have to be careful enough how many breads and starches I eat without having to ration my mayonnaise intake.
People simply don't notice or think about it, and why should they?  Its not their problem and they are fine with the sugar added to foods.  But it means I have to pick through food like a bird looking for a specific seed and that's uncomfortable for the host and embarrassing for me.
Eating out at a restaurant is enough of an adventure for people with lactose intolerance or other food allergies without putting sugar into food that doesn't need it.  We could really scale back on the sugar in our foods, America.  Europeans are right about this.
Posted by Christopher R Taylor at 1:49 PM