HATING HATERS FOR HATE IN A HATEFUL WAY 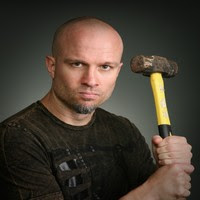 I'm not a football fan.  I'll watch a game with friends on occasion, but the game its self is fairly dull to me.  I understand what's going on just fine, its just not very interesting to me.  As a result, the stars and personalities of the game aren't very interesting to me either, like Tim Tebow.
Tebow is a fair talent, and a matter of considerable controversy both as an athlete and in his personal life.  Although the only cause for the argument is Tebow's open and unashamed faith, that's been enough for some people to despise him and others to become deeply loyal fans. He seems a tolerably good quarterback, although others suggest he'd be better off in a different position.
But Tim Tebow's unapolagetic Christianity seems to drive some people crazy.  Take, for example a recent piece that ran on CBS sports by Gregg Doyel:

Tim Tebow is about to make the biggest mistake of his life.

Jeffress isn't as bad as Westboro. He doesn't send his flock to funerals of U.S. soldiers and have his sheep yell awful things like, "God hates fags." But he comes close. Too close. He believes, he has said, "It's a fact that [AIDS is] a gay disease so there's a reasonable reason to exclude gays from the military."

Jeffress is a bad guy. He says Jews and homosexuals are going to hell. He says the Catholic church is a satanic cult. He says Islam "is a religion that promotes pedophilia -- sex with children."

Mormons? They're going to hell, too, but Jeffress was willing to overlook that and promote Mitt Romney over Barack Obama in the 2012 presidential election because Obama, Jeffress said, "is paving the way for the future reign of the Antichrist."

There's more along the same lines, with greater and greater intensity and fury, ending with the foot stamping quote at the top.  The entire piece is a combination of condemnation for intolerance and what he defines as hate... with his intolerant hate for those he disagrees with - at least, the way he defines it.
The fact is, the Bible teaches that we're all going to hell, unless saved by the grace of Jesus Christ.  That means Jews, Gentiles, Muslims, non Muslims, homosexuals, heterosexuals... everyone. Unless saved, we're all headed the same place.  That's how it is, in the Bible.  There's no singling out people by groups, and I doubt Pastor Jeffress does.  Trying to compare him to the Westboro Baptist Church is hysterical slander by a man who seems like he has a personal vested interest in the debate.
The reason some groups get brought up is that they're being presented as fine, normal, even positive members of society, and it is a pastor's job to condemn sin and to call for repentance.
There's a major difference between calling for someone to repent rather than face hell and hatred toward someone.  The problem is these days, telling the truth about certain groups or people is cause for hate toward them.
Jeffress is a pastor whose sermons and writings available online seem to portray a man more concerned about saving the lost and reaching out to the weak than hate, but I suppose that doesn't really matter to someone like Doyel.  He says the wrong things about the wrong topics, politically speaking, and that simply negates every single other aspect of a human being.  Its how witch trials happened; blind, unreasoning fear and hatred that negates every other piece of evidence and logic.
These days it seems like you can't simply disagree with people, you have to shove them into a devil suit and scream hate at them until they run away or you go hoarse.  You can't simply part ways or have topics you don't see eye to eye on, you have to burn them in effigy and hate them with every fiber of your being.  Its sad to see that happen, but it does all too often.
Mr Doyel and I might be friendly enough on other topics, we probably both like Baseball and other things.  We would find common ground most likely and the man seems successful as a writer, which is better than I've been able to do.  But its clear if he learned what I believe about Jesus, the Bible, and life, he's go off on me the same way and decide I was anathema, someone he'd call for burning at a stake a few hundred years back.
Its just so odd to me to see someone fire off such a spittle-flecked diatribe so steeped in hate and rage with the thesis that someone who hates need to be condemned.  Mr Doyel seems like a fellow who could benefit from looking at a mirror.
Posted by Christopher R Taylor at 10:58 AM