THE WORLD IS FAIR

"Expositions are the timekeepers of progress. They record the world's advancement. They stimulate the energy, enterprise, and intellect of the people; and quicken human genius. They go into the home. They broaden and brighten the daily life of the people. They open mighty storehouses of information to the student." -President McKinley 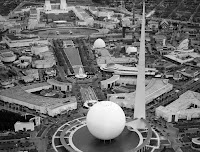 The last World's Fair was held in Yeosu, South Korea, in 2012.  They aren't called "world's fair" any more, they're just called Expo, as in exposition.  The next one is due to be held in 2015 in Italy, but the last one to be called a "worlds fair" was in the 60s, when the name changed to Expo.  I believe but cannot find confirmation that the Montreal Expo of 1967 was the first one by that name (and where their now-defunct baseball team got its name).
The first was held in 1851, in London of course, as that was effectively the capitol of the world at the time.  Called "Great Exhibition of the Works of Industry of All Nations," it was the brain child of Albert, husband of Queen Victoria.  Notable figures such as Charles Darwin, Samuel Colt, Charlotte Brontë, Charles Dickens, Lewis Carroll, and Alfred, Lord Tennyson were in attendance.
Among the various exhibitions there was the unveiling of Colt's Navy pistol, the first real functioning single action cartridge pistol; a prototype to the fax machine by Frederick Bakewell, a Jacquard Loom, and various kitchen appliances.  In essence it was a display of the wonders of the world and new technologies.  The main exhibition was held in a new structured deemed the "Crystal palace" which was essentially a gigantic greenhouse, but it was destroyed by fire in 1936.
As the world's fairs became a regular event, one of the biggest and most noteworthy that ever took place was in 1939 in New York City.  This is one of the most iconic of the world's fairs, one which many people associate with the event.  This was the fair with the perisphere and trylon (big orb and tall pyramid).  It was promoted heavily for years before it took place, and tried to focus on new technologies, science, and what the future would likely hold.
Like many of these fairs in the past, it was a place of wonder and innovation.  Converting an ash dump in Queens to a fairgrounds and exhibition center, the plan was to help New York and its citizens through the depression by attracting world dollars.  The fair was set to open on the 150th anniversary of the inauguration of George Washington, who was sworn into office in New York City.
The New York World's Fair opened on a hot April 30th (most of the 1930s were unusually warm, like the 1990s were), and President Roosevelt was on hand as part of the ceremonies.  His speech was broadcast over the radio, of course, but also was televised, and shown on W2XBS, which inagurated regular television broadcast at the event (this would later be WNBC).  Albert Einstein was on hand to give a talk on cosmic rays.  Among the displays and technology present were these: 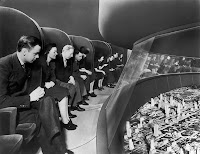 One of the most astounding displays at the fair was from the General Motors Company, where an entire miniature country, with 50,000 miniature cars driving in it, were on display.  A ride took you through the entire setup, with details on what was being shown.  It was the brainchild of Norman Bel Geddes, and it was called the "futurama" exhibit.  There were mountains and lakes and forests and a city.  More than five hundred thousand individually designed buildings, a million trees of thirteen different species were built over an acre of territory with all the cars in motion around the track.
Futurama was an attempt to show how cars would shape the future of transportation and economy, and how the cities would deal with this increased traffic.  In 1939 cars were still sharing the roads with horse drawn vehicles and horses.  Although gaining rapidly in popularity, there were not the large numbers of automobiles we now take for granted.  Geddes said:

“Futurama is a large-scale model representing almost every type of terrain in America and illustrating how a motorway system may be laid down over the entire country – across mountains, over rivers and lakes, through cities and past towns – never deviating from a direct course and always adhering to the four basic principles of highway design: safety, comfort, speed and economy.”

Geddes built highways and showed how the city would cope with this increase, such as divided highways, traffic controls, set speeds, and pedestrian access.  Also predicted were automated highways where the cars drove themselves, rooftop access for flying vehicles, and automated robotic farms.  Almost everything he predicted was either fulfilled or seems to be in the near future.
It was a place of wonders with art, food, entertainment, technology, and more.  The place showcased the near future, and was something I would have dearly loved to attend.  And we just don't see anything like that any more.
Oh sure, I hear you say "but we have G3 and technological exhibits every day!  Why I have a computer in the palm of my hand!"  And its true, we have a never-ending stream of new entertainment and gadgets coming out of various labs and exhibitions.  But consider: none of them are particularly new concepts; computers have been around for nearly a century (or longer, depending on how you define them).  Television screens were created in the early 20th century.  The microchip was invented in 1959.  Liquid Crystal Displays were invented in 1962.  Touch screens were first created in 1966.
All the newest innovations are either new combinations or smaller versions of existing tech, or faster, fancier versions of what came before.  Sure, the video games of today have graphics that look like the cutscenes of 5 years ago.  But they're still just video games.  They're prettier, but they aren't any different.
Imagine going to a show where an entirely new light source that is dominant today was first shown, when many people still lit their home with a gas lantern?  Imagine seeing highways and traffic systems shown when you still rode a horse.  Imagine seeing television for the first time when you were just getting used to that new wireless.
We simply don't see that kind of thing any more.  And while I can't say for sure, I suspect at least part of it is due to us hitting a wall of innovation.  We're getting to the limits of what our technology and understanding of science can get us.  Its not that we can't create new ways to use what we know, but nobody is going to discover how electricity acts or invent the cathode ray tube these days.
Further our culture has moved from "can do" and a desire to see if we can't fix things and make them better to a "gimme" culture which whines at difficulty and demands being cared for by an all-powerful government.  In the place of a people who saw challenges as an adventure and a chance to roll up our sleeves and overcome, we have a people who see a challenge as a violation of their civil rights and throw a tantrum until the government creates a new program to throw money at it.
Then there's the market pressures.  People aren't interested in something that makes their work better, they want things that make their fun better.  Focused on pleasure and entertainment, people pour money into things that make them feel sexy and have fun.  Health innovations are focused on "sexual enhancement" and looking hot instead of being healthy.  So there's no money or demand for anything like nylon or a better dishwasher any more.
And finally, regulation, lawsuits, and economic pressures combine to make innovation not just expensive, but even prohibitive.  Its not just that it costs a lot to try to develop something new, but unless it is politically correct and approved by the powers that be (AIDS research, for example), its actually a struggle to even get the work done.  Animal protesters destroy your lab, lawsuits try to stop you from your work and punish you for completing it, and regulations choke off your options.
Between these forces, innovation is limited when its even possible and you just don't see it any longer.  Maybe its unfair to compare the two.  The 1939 world's fair was an astounding combination of events and times.  But the truth is, those times are over and I don't see them returning for a long, long time.
Posted by Christopher R Taylor at 10:01 AM