HOW FOLKS GET THEIR NEWS

"Why do you lay these troubles on an already troubled mind?"
Grima Wormtongue 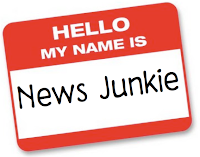 Newspaper circulation and ratings of news shows continue a downward plunge, with very few exceptions.  This is met with glee by conservatives, and a bit of puzzlement as well; why won't these news organizations change their behavior?  Why do they seem to be even more slanted than before, why do they go out of their way to avoid covering huge pulitzer prize-caliber stories?  And why, with less and less actual audience to these news organizations seem to continue to have so much influence?
There's a study that was done by Marcus Prior at Princeton University (pdf file) which helps make sense of all this.  He compared the audiences of various news shows (cable and network) with the general voting population and discovered something pretty basic: so few people watch these things that they cannot be the source or even a major contributing factor in public understanding of issues.
Sure, the hardcore news junkie and fanatic will watch these shows and study them, but the general public just doesn't.  Fox News, for example, is the highest-rated news channel in the country, and on each average night, bout 0.7% of the population of the country watches it.  That's several million people so it seems like a lot, but compared to 315 million, it just doesn't add up.  Adding up all the cable news channels combined still isn't a very big number:

The share of Americans who watch cable news at a rate of 10 minutes or more per day is probably no larger than 10-15 percent of the voting age population and rises modestly when an exciting election approaches.

And that's how the system works.  The news chooses what to report ("the deciders") and what not to, carefully crafts what is exposed, and puts it out.  The few people who actually pay attention to this then pass what they learned on to the public through various media, using not argument and persuasion but attack and sarcasm.  Michael Savage doesn't try to convince anyone of anything, he just yells and gnashes his teeth.  Jon Stewart puts on a false display of rhetoric on occasion, but its always just sophistry and sight gags.  These people are about shaping opinion, not persuasion.
So the fact that these news organizations are all but dead on the vine doesn't matter a bit in terms of their ability to manipulate events and politics.  In fact, they're more powerful than ever in this, because they are the Wormtongue of modern culture, whispering into the ears of the pundits and opinion makers, slipping their ideas into every possible setting and avenue, just to get people to think a certain way without even realizing it.
Its not so much collusion or design, there's no secret panel meeting in robes by torchlight under the Hollywood sign.  It more or less fell into place, not by craft but by coincidence; most people behind popular culture and entertainment lean left, so they trust their political allies.  Yes, there's been a concerted effort over the decades to build a coalition of people in various places who agree politically, but this just happened organically as the effort continued.  Nobody saw it coming, but they all found a way to make it work for them.
MSNBC and CNN don't really persuade anyone of anything, they tend to only confirm what their viewers already think, but those viewers then reach out and persuade others not through argument and fact but subtle peer pressure, mockery, and unexpected imposition.
*UPDATE: A perfect recent example of how this works.  A recent episode of the show Elementary featured a big snowstorm, and Sherlock Holmes quipped about how storms are getting strong and more powerful over recent years.  This is absolutely false, the opposite is actually true.
However, the writer of Elementary wanted Sherlock to say something smart and informed about the weather, so he put this into the mouth of the actor.  People who don't know anything about weather, climate, or even science hear it - from the mouth of an alleged expert on all things, no less - and believe it to be true.  After all, Sherlock Holmes....
Why did the writer do this?  Because he's been reassured by all the "correct" sources that not only is global warming causing horrific weather, but that anyone who doubts this is a knuckle dragging, sister-marrying, Fox news watching imbecile teabagger; never to be heeded.  And so it goes.
Posted by Christopher R Taylor at 8:56 AM