A MATTER OF COMPENSATION

"The answer to Freud’s famous question 'What does Woman want?' is 'Everything they can lay their lovely little hands on.'” 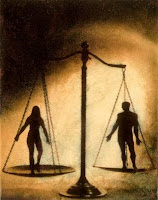 One of the things a wise employee examines when they consider a job is the entire package of benefits and pay it offers.  If one job offers $50,000 a year and no benefits while another offers $45,000 a year but full medical and dental insurance plus paid vacation leave and retirement, the latter is the far better job in terms of payment despite its lower dollar salary.
That's why CEOs get such gargantuan pay at mega corporations, because they're being paid in stock options and incredible benefits as well as their salary, and that's all calculated when a story is written about them.  You have to figure in the company jet and penthouse, not just the money.
When I wrote my bit on women, pregnancy, and pay, it generated a lot more interest than I expected.  American Digest, Ace of Spades, even a commenter on Reason linked to the story and its earned quite a few visits, and comments, which I appreciate.  But one commenter brought up a very good point I had not considered in my post:

The point of the articles isn't how many weeks of parental leave a particular state gives fathers vs mothers. The point is that some employees have the potential to cost employers more via increased benefits, reduced productivity, etc and the employers has every right to consider that during hiring.

What should matter to logical people is total compensation, not just salary. Let's say you have several workers who all have the same average productivity. It is perfectly fair for Worker A to get a higher salary, while Worker B gets better insurance, Worker C gets more time off, etc. If one worker wants better insurance, time off, flex schedule, and other benefits then she has no right to complain that she gets paid less than another employee who does not take those extra benefits.

In other words, you have to look at the whole compensation package to compare earnings.  If women get paid x dollars per hour plus maternity leave (paid in some states), and men get paid x dollars per hour, that means men are being underpaid because their benefits are inferior.  By this calculus, women ought to be paid less, because their superior benefits make up for the slightly lower pay per hour or salary.  In other words, when you argue women should be paid the same as men, you're arguing they ought to be better compensated than men.
In fact, when you factor in child care and other costs (insurance, for instance) women typically, but not always, tend to get more benefits than men.  Obviously some men will be more costly or have kids they require insurance and child care for, so that's variable, but I think the point is clear.
So when you compare women and men in pay, and you want equality and fairness regardless of economic factors, even then women should be paid less.  In the name of fairness and equality.  Assuming that's what you're really after.
Posted by Christopher R Taylor at 12:28 PM