Another year has passed me by
Still I look a myself and cry
What kind of man have I become? 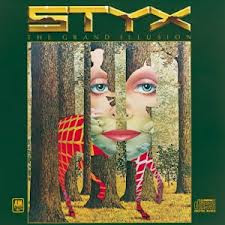 Its difficult for young people today to really grasp how big Styx was.  My niece loves the band, she's a huge fan as a teenager, and there are a lot of young people who are in the same boat, but its difficult to really understand the vast popularity the band had.  Styx put out album after album of incredibly great music for years and packed the biggest stadiums on earth.  When Grand Illusion came out in 1977, Styx wasn't as big as it became though.  They opened the previous year for Kansas on their Leftoverture tour.
Now, think about that a moment.  This was the time when Led Zeppelin, Pink Floyd, The Who, Rolling Stones, Fleetwood Mac, Steely Dan, ELO, Lynyrd Skynyrd, Supertramp, Bob Marley, Boston, Yes, Rush, Queen and many others were at their best and at the same time new acts such as the Talking Heads, Elvis Costello, The Clash, and Cheap Trick were just getting started.  It was really a golden age of rock and roll.
One of the best albums of 1977 was Grand Illusion, the 7th disc by the band who started recording in 1972.  Preceded by Equinox and Crystal Ball, both great albums as well, this disc launched Styx into superstardom and they carried that mega success into the 1980s.  Styx is still recording and putting out music and they just went on a tour in which they played every song in sequence from of Grand Illusion and Pieces of Eight.
One of the songs on Grand Illusion is "Man in the Wilderness" by Tommy Shaw, one of their lead guitarists.  Shaw says he wrote the song based on his wonder at the incredible music that Kansas played on the tour they opened for, and he wanted to write something like that.  Something deep and thoughtful with a sweeping, epic sound.  He did well; "Man in the Wilderness" could easily have been recorded by Kansas, yet still sounds like Styx.
The song is about several things, among them the return of his brother from the Vietnam war and his sudden rise to immense fame.  Styx went basically overnight from a hard working rock band to a mega act and it takes some doing to get used to the change.
Shaw is examining his life, and wondering what it is about and what he's become.  Life doesn't seem to make sense, but he knows it should.  Especially put against songs about ho's and bitches and swag and YOLO and whatever these days it seems particularly deep and tragic.  I hope Shaw found some answers, because even today when he sings it he seems sad.  I don't have a lot of patience with super rich, successful people whining about how hard their life is (the 90s were full of this kind of trash, with emo groups moping about how miserable everything was for them) but this song is about more than just feeling low.
All the success he has, all the popularity, its empty and he knows it.  He recognizes that no matter how much money he makes or how many hundreds of thousands of people come to the Styx shows, or what hot chicks are waiting for him in the dressing room, there's supposed to be more to life and he wants that more than the fame and fortune.  And I think to some degree all of us feel like a man in the wilderness at times, lost and confused and knowing something isn't right.
Another year has passed me by
Still I look a myself and cry
What kind of man have I become?
All of the years I've spent in search of myself
And I'm still in the dark
'Cause I can't seem to find the light alone

(I'm alive)
Looking for love I'm a man with emotion
(And my heart's on fire)
I'm dying of thirst in the middle of the ocean
I'm alive!

This is part of the Songs I Like series.
Posted by Christopher R Taylor at 10:20 AM