"As a senior member of the group, it is my responsibility to be a role model for younger members."

A few months back I wrote about the J-Pop phenomenon, where big groups of teen girls dance, sing, wear silly costumes, and generally try to entertain for money in pop music.  They do little movies, advertise, put on shows, and so on, selling millions of CDs to adoring fans.
There's a price to all this, of course.  Yes, the girls are living a dream of singing and dancing for a living, yes, they are beloved by fans and idols to millions.  Yes, they make a lot of money and have wonderful things to wear and play with.  But they also sign a contract which has several stipulations and requirements.
For one, they can't publicly date or have a boyfriend, get pregnant, or get married.  In a nation where the age of consent in Japan can be as low as 13, a middle school girl could get married.  But the girls are presented as chaste virginal maidens for two reasons.  First, the  producers want the band to have an image of being made up of little virgins, and second, to maintain the fantasy for many of their fans.  Sweating middle aged men lusting after the members of the band would be disappointed if some other guy was dating them.
One member recently was caught having spent the night with a male friend - slept with a boy, in other words.  Minami Minegishi is her name, one of the primary members of AKB-48 and 20 years old (a bit old for the band).  A tabloid in Japan printed pictures of her leaving the 19 year old boy's house in a cap and surgical mask, and she was immediately attacked for betraying her band. 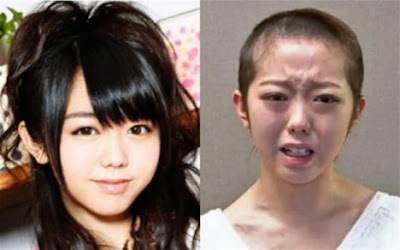 So she shaved her head in a traditional act of contrition and filmed a tearful apology and begged for forgiveness in a YouTube video.  Miss Minegishi is a pretty girl, but she's been demoted from her position from the main "A" group to the lowest, trainee rank of the band where new girls try to learn the moves and songs and demonstrate their talent.  I presume the pay is significantly lower as well.
Minegishi begs to be kept on the band in her video, and she might although she is getting a bit old for the group and they are cycled out as they get older, no matter how popular they might be.
In fact, given the competition to be one of the limited few who can be in rank A of the band, it wouldn't at all surprise me if the tabloid wasn't tipped off by one of the other girls, hoping to move up into the vacancy that would result.
Now, there's some controversy around the world regarding this.  Some are calling it barbaric and awful, some say its stupidly prudish and ridiculous, and not a few Japanese are aghast that this is getting such prominent coverage around the world, feeling it embarrasses the nation.
The thing is, while I think its probably humiliating for her, its pretty minor as these things go.  She signed a contract, she made an agreement to abide by some basic rules.  Its pretty simple: if you want all the goodies, you have to toe the line.  You want that money, that fame, those things, the chance to be a big time star, to dance and sing for a living?  You have to go without certain things, like a boyfriend a few years.
That might sound callous, and at the age of 14 I imagine it sounds like forever to go 6 years without a date, but it really isn't that long and nothing in this life comes without a price.  Was the public apology really necessary?  Well the producers of the band thought so, apparently.  Yes, people are trying to say this was spontaneous on her part, but I am confident she was ordered to do it (or, at least heavily pressured) to help fix the band's image.
What is creepy and disturbing is that AKB-48 promotes its girls as cutsey virgins, but at the same time has promotions where they give way a pair of panties with a calendar, sing songs with thinly veiled sexual references, and overall push the girls as sexual objects with panty-flashing dance moves.  These girls are often quite young and that's creepy to me.
Banning a girl from dating (or sex) then humiliating her when she breaks the rules might be odd, but its not nearly as disturbing as how the band is used.
Posted by Christopher R Taylor at 10:42 AM