This is a post I did a while back that I started thinking about last night while pondering gender roles and what's happened to both men and women in the modern west. It didn't seem to get much attention at the time and I wanted to revisit it today.

"A man cave is a lair of refuge and escape where bros can be bros well into middle age, even when married and occupying a house with a female co-inhabitant."

Wow, the Man Cave, can there be anything more masculine and manly? Have you started making your own? Maybe this Christmas you can get some stuff to put in yours, such as these suggestions from the website "Bro Bible"
...and so on. Apparently being a man is about sex, beer, and sports. At least, to Bro Bible.

I sympathize with men wanting a place they can call their own, a spot in their house they can retreat to and be in comfort and happiness. I remember well Al Bundy retreating to his bathroom on Married With Children to escape the family. It was the one place in the house that was truly his, instead of controlled by his wife.

Now, I'm not saying the house should look like a cross between a frat house and a hunting lodge. Women typically are better at decorating and its her house too, in a marriage. She should have her input too. But if you're shoved off into one room while she puts 15 pillows on the couch and teddy bears everywhere, there's something basically wrong not just with the relationship but you as a man.

I know its easy for me to say as a single guy but men: when a guy comes into your house and it looks like the set designer for Oxygen channel fixed up the place, that says a lot to us about you. Its fine to have her touches, but the place should have your touches too. I don't want men to turn into interior decorators, I just want us guys to have our say and our stuff in the house as well.

But then... women carry baggage from their youth that should be abandoned too. I know you adore that stuff you carried with you from teenage years, but... let it go. You expect your man to grow up and abandon the trappings of his single days, you need to as well.

And think about it. What does it say about our comprehension of masculinity when the entire concept of a man cave is about permanent adolesence? I don't have a problem with beer, video games, and beautiful women. I have a problem with that defining your gender. Men are not bigger and older frat boys. Masculinity is not defined by the word "brodawg" and how many beers you can chug.

The entire concept of a "Man Cave" is like some child's misconception of what dad's room was like, its a juvenile caricature of masculinity, surrendered to female supremacy. A man's study with books and hunting trophies, a good comfortable chair, and so on was about what a man accomplished in life and how he bettered himself, not about how he parties, pukes in a trash can and lusts after ever-younger women (relative to his age) that are ever more out of his reach while playing video games.

Its fine to have a room especially masculine in a house (like a woman might have a room that's especially girly), set aside for a guy to escape into. Believe it or not, guys need to get away from women once in a while, and that's not unreasonable - women need to get away from men too, and since the workplace can't provide that any longer, this is an aid. But this room shouldn't be an island in a sea of femininity and it shouldn't be some throwback to your early 20s single party years. 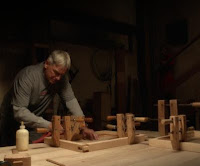 Rethinking this idea, I came up with a solution.  You want a man cave?  You want a special manly spot where you have stuff of your own and get away from the lady of the house?  Fine.  But don't make it a treehouse for teenagers, don't make it the frat boy version of the He-Man Women Hater's Club.  There's a reasonable "man cave" on television regularly, on NCIS.  Its the basement of Special Agent Gibbs' house.  Its  a workshop.

This is a place of masculinity that has a purpose other than distraction and entertainment; its a place where some work gets done, something is produced, and a man can focus on a pleasing task rather than a game or amusement.  To me, that's a man cave, not some boy's clubhouse.
Posted by Christopher R Taylor at 9:56 AM