"Stop being so lazy and get to work like everyone else!" 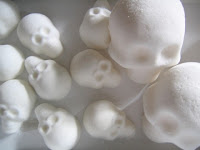 These days it seems like everyone has some weird health syndrome, most of which showed up in the last 20 years and was unheard of before that.  Restless Leg Syndrome, Attention Deficit Syndrome, and so on all suddenly are plaguing the world - along with drugs to fix them, supposedly.  Now I'm not going to say flat out that this stuff is absolutely false, it may have some credence.  Having Chronic Fatigue Syndrome I know what its like to have something crappy wrong with you and people think its just an excuse or all in your head.
But it seems like there's been a surge of dubious health and psychological diagnoses, usually tied to someone's book or medicine to make it better, and it is difficult for me to not smell a whiff of snake oil in the whole deal.
At the same time, I've been suffering from some health problems I can't quite work out over the last five or six years, problems that the local doctors were unclear on.  People said it was something dietary, and by changing my diet I certainly found some relief.
I've written about this before, but basically if I imbibe even small amounts of sugar (say, a brownie) or caffeine, my body reacts very poorly.  I get a burst of energy and feel good personally for an hour or so, then I start to feel awful for several days.  Eating a candy bar can put me down for a good week, but 3 days is usually enough to "detox" myself.  Here's what I mean by awful:
Now my doctor tried a few things like nitroglycerine when my heart hurt, and that was one of the worst experiences of my life.  As soon as I took that tiny pill it felt like my heart rate had tripled, I had one of the worst headaches I've ever known (like someone had pumped most of my body's blood into my head all at once) and I started sweating and shaking.  Whatever was going on, I threw the bottle away and never took any again.
The Oregon Health Sciences University and my own doctor noticed in tests that several of my body chemicals were out of whack, some by a huge margin.  My Triglycerides, for example, were double what they should have been.  In fact my doctor was baffled, my tests suggested I was a 400 pound cake gouger, eating sugar all day by the bag.
Well, by cutting out sugars in my diet and all caffeine (which was very sad, Iced Tea is my favorite drink, and its basically rat poison for my body) and resting heavily, I managed to "detox" and feel significantly better.  Now, I just have to avoid any sugary foods, even non sugar sweeteners of any kind (and that means any, not even your special kind you discovered - I've tried them all), caffeine, and too much of any carb like bread, and I'm much better off.
But its weird.  I never liked sugar much before.  As a kid my mom would offer me a cookie or some carrots and I preferred the carrots.  I didn't care that much for chocolate, sweets, etc.  But now I catch myself craving sugar.  When I see candy I want to eat some, and I have to restrain myself.  If I eat any I don't really like it (doing without sugar makes it sickeningly, overpoweringly sweet) but my body seems to be happy -- for a little while, then its miserable.  I seem to crave sugar, even though its horrible for me.
Well for years that was a mystery, but today reading up on things I discovered a couple things online.  Now, again as I said there's all these sudden health problems being "discovered" lately and I'm skeptical but these do really fit.
The first is called "Adrenal Fatigue."  The theory behind this is that really awful food and lifestyle can cause your system, especially your adrenal glands, to go out of chemical balance.  Essentially stress to the adrenal glands through poor health causes them to produce improper amounts of different hormones, particularly Cortisol.  This results in some odd combinations of symptoms such as these:
Now, other than the difficulty bouncing back, all of those things were true for me.  Some still are.  Proponents say it comes about due to high stress faced continually or a series of terrible events you go through, possibly combined with too much sugary food and bad diet.  Without going into details you don't care about, I can assure you that's what I went through before my body started reacting to sugar like this.
However, I'm skeptical since there's little science behind the analysis, and the full list of symptoms reads like "I feel bad" and covers too much ground.  It just seems like bad science, or at best ignorant, poorly understood science.  Reputable doctors and institutions are highly skeptical or just plain dismissive.  Most of the people who consider this quite reasonable and diagnose it are "alternative" doctors rather than actual medical people.

The second is a bit more plausible to me, and its called "Sugar Sensitivity."  Basically this means your.  body doesn't handle sugar very well.  Its not hyper- or hypo-glycemia, but they think it is more that your body doesn't respond properly to sugar input.  Your body is supposed to produce insulin to respond to sugar and help metabolize it, but they think its putting out too much insulin, which causes huge spikes in sugar levels in your system.  They also think that it causes improper level of Seratonin and Beta Blockers in your system which greatly influence mood.
My family can definitely attest that my mood changes.  I'm generally easy going, calm, even gentle natured, but when my sugar levels get out of whack or I'm just really tired, I get really touchy, like a pissed-off wildcat someone poked with a stick.  I try to fight it but its like I have a hair trigger and respond very angrily.  I drop something (which is all too easy in this condition) and explode with rage and sadly obscenities far too often, and so on.
However, the sugar high thing isn't as much of an issue for me - I don't get super happy, just feel less stressed and more at peace. For a brief time.  At the same time I can almost immediately feel the effect of sugar on my body, within minutes my  heart starts feeling uncomfortable, even hurts a bit.  Its a bit difficult to explain, but its like a bowling ball is sitting right over my heart, like pressure and an ache.
In any case, the sugar sensitivity bit really does fit very well with my symptoms, and especially their solutions: eat less sugar, eat more protein, get more sleep, go to bed earlier, eat regularly and on time, and so on.  And having at least a clue as to what's going on is helpful to me.  Its difficult to explain to someone who has no ongoing health issues, but having something make you feel awful and having no name or clue what it is, is a stress in its self.  Especially as a man I want to find a solution, to fight it and make it go away.
The good thing about Sugar Sensitivity is that it doesn't seem to be as doubted or scoffed at by doctors.  This seems pretty solid scientifically and it definitely fits my condition very well.  Some of it doesn't fit; I don't have weak willpower (if anything I get more stubborn, to the point of just being arbitrarily insistent on pointless stuff), I don't have weight gain or heavy mood swings, just irritability.  But most of it fits quite well.
And again I have to wonder if all these health problems we keep running into lately aren't less a result of over analysis and people looking for excuses than they are a symptom of something very, very wrong with our culture and diet.  All those chemicals dumped into food can't be totally harmless.
What is very frustrating to me is that food companies slip sugar into everything.  Just about every recipe book puts sugar into the most pointless foods.  Packaged food tends to have sugar added for no reason.  From salad dressing to soup, they pour in the sugar, and its very annoying to me.  If I had a fortune, I'd spend some of it on a food line that leaves out sugar, excess salt, caffeine, and dairy products if for no other reason than to have it available to me.
At least its helped clear up some of the mystery.
Posted by Christopher R Taylor at 8:27 AM

You are going to need to raise your own food in order to stay healthy.

Well I can get by with eating carefully and if I'm not stupid (craving for sweets) I can do fairly well. It probably sounds worse than it is, to be honest.