"I think women are too valuable to be in combat."
Caspar W. Weinberger


A few months ago I wrote about women in combat situations regarding an analysis by a Marine Captain who as a woman found out what it was like to face that grueling ordeal.  In it I predicted that before the end of his term, President Obama would open up combat to women, which has just happened.
Captain Katie Petronio wrote in the Military Corps Gazette about this, which I wrote about in the above link.  In summary, she concluded that while a woman can equal or exceed men in physical fitness and ability, they cannot equal a man's ability to engage in sustained combat operations in the field:

I was a motivated, resilient second lieutenant when I deployed to Iraq for 10 months, traveling across the Marine area of operations (AO) and participating in numerous combat operations. Yet, due to the excessive amount of time I spent in full combat load... [m]y spine had compressed on nerves in my lower back causing neuropathy which compounded the symptoms of restless leg syndrome.
By the fifth month into the deployment, I had muscle atrophy in my thighs that was causing me to constantly trip and my legs to buckle with the slightest grade change. My agility during firefights and mobility on and off vehicles and perimeter walls was seriously hindering my response time and overall capability. It was evident that stress and muscular deterioration was affecting everyone regardless of gender; however, the rate of my deterioration was noticeably faster than that of male Marines and further compounded by gender-specific medical conditions. At the end of the 7-month deployment, and the construction of 18 PBs later, I had lost 17 pounds and was diagnosed with polycystic ovarian syndrome (which personally resulted in infertility, but is not a genetic trend in my family), which was brought on by the chemical and physical changes endured during deployment.

And Captain Petroino brings up a lot of stats and data on female vs male performance ability, although as she notes we have virtually no data on "female attrition or medical ailments of women who have executed sustained combat operations," as she puts it.  What we do know is that women and men are unable to compete equally in any real sport on earth.  Even in golf women have a hard time even qualifying with men.  The best women in the world simply cannot compete with the average male athelete in tennis, basketball, and other physical sports.
But wait, you say, other militaries have been using women in combat for a long time, and we haven't heard about this!  This is true, but these other militaries have rarely if ever seen hardcore long term combat operations with women involved, and the data on what happened to the women if that takes place is not available, it just isn't recorded or reported.  Sweden can have an all-woman army if it wants; they aren't going into 10-month combat operations.  Any military that doesn't actually go fight wars can consist of anything it wants, that's not going to signify.
This seems to be a shock to many people but men and women are different physically, something that is true at more than a superficial level.  Further, women's chemistry seems to be more changable, something men do not seem to deal with.  I knew a woman who had straight soft hair before she got pregnant and afterward it became extremely curly and coarse.  We are not the same, and cannot do the same things, that's just how it is.
Take a look at this picture and tell me this would be a great combat soldier: 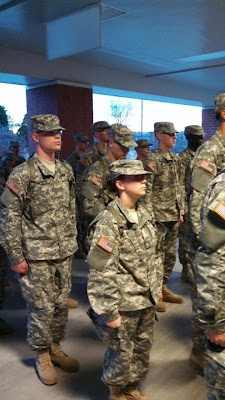 She's not going to take the Super Serum and go through some complex technological process to become Captain America.  She's never going to be bigger or tougher.  And despite what you've seen on TV and the movies, little girls cannot beat up big mean tough bad guys.  Martial arts doesn't make you able to take out guys significantly bigger and tougher than you are if you're that dinky.
I'm sure she's a great girl, I'm sure she's loyal and honorable and brave.  That doesn't make up for physical stature and physical ability.  Someone with Muscular Dystrophy in a wheelchair can be all those things but it doesn't make you a combat soldier.

And as it turns out, women probably won't get involved anyway.  Donald Sensing writes at American Digest where I found the picture shown above:

Back in the early 1980s, the US Army opened artillery specialties to women except for cannon crewman, which is an incredibly physically-demanding job. A fair, but not great, number of women volunteered and most of them just as quickly volunteered out once they found out how hard it was.
By the mind-80s the Army officially closed artillery branch to women and retrained the two or so women who were still in it.
There are many jobs that women will naturally gravitate to and infantry and other direct-combat, extremely physically-demanding jobs simply are not among them. Civilian experience in the job market shows that this is true, and not just in physical jobs.
Postscript: When I was the brigade fire support officer for 1st Brigade, 3d Armored Division, the brigade's tactical operations center (TOC) consisted our four armored, tracked command post vehicles (M577 if you're interested, do a Google search to find a pic). They were my vehicle plus one each for Operations, the engineer section and the S2 Intelligence section. The S2 officer and all three section soldiers were females. Whenever we occupied a new position, it always took the S2 section about 15 minutes longer than the rest of us to get ready to fight because of the manual labor involved in setting the TOC up.
Understand, none of the women ever complained, none were slackers and all were pretty good soldiers and did a good job in their specialty. They were simply too bodily small and under-muscled to keep pace with the men of the other sections. Usually the operations and engineer troops would finish their setup and then help the S2 section.

Women understand they can't keep it up, and further the ones who try find out in short order and move out of it.  So as Donald Sensing points out, this means there's no real change here.  The social engineering cannot conquer actual physical fact, no matter how much they push it and decorate some poor girl who gets to be their guinea pig.  Is it possible that some genetic freak will be able to pull it off?  Sure, it can happen.  Sometimes a child is born with no eyes, too, that doesn't mean that should determine policy for all children.
Another concern Captain Petronio brings up is this:


Who is driving this agenda? I am not personally hearing female Marines, enlisted or officer, pounding on the doors of Congress claiming that their inability to serve in the infantry violates their right to equality.

And she's right, soldiers aren't demanding this.  There was no massive demand for women in combat.  There was no legislative agenda, no mandate, no voice of the people, no military desire for it.  It is simply people who never have been in the military, let alone faced combat who are backing it.
Remember the whole "chickenhawk" argument, that it was only people who didn't risk their lives who demanded war?  Remember the old hippie complaint that its old people who send young people to die?  That's you, Obama administration.  You're the ones sending women to die, in a way and place God willing you'll never face personally.  This isn't something that came about due to any military need, its an agenda by the hard left in charge of the government.
And as I said in November, expect more of it.  Expect the whole ancient, awful list of leftist pipe dreams to run down the line from reparations to gun control, watch for it all before the end of this administration.  When President Obama said he wanted to "fundamentally change America" he wasn't just making a speech.  That is his driving goal.
And when its all said and done and people are looking on in shock and horror, don't blame me.  I didn't vote for the guy even once.  A bunch of you out there did, though.  Thanks a lot.  When it all happens I won't say "I told you so" any longer.  Everyone should know by now, should have known in 2008.  If they don't, there's no reaching them anyway.
Posted by Christopher R Taylor at 9:35 AM

The women pictured may not be able to get as far down the road with a full combat pack on her back, or come out of a ten or twelve month deployment in usable shape but there is one thing she can do as well if not better than her male counterparts.
Suck up training dollars.
With the enormous reductions in the funding for the US military, now and in the future (four years, remember?) The number of troopers that will get run through the pipeline will slow to a trickle. Every one will count.
Unfortunately, every women slotted into the training that produces the elite soldiers that have made the US soldier such a feared opponent is a waste.

My daughter's a combat medic in the Army National Guard. She has no illusions about being in the infantry as a combat soldier, but women can fill important support roles.
HK