"Mathematics is a game played according to certain simple rules with meaningless marks on paper."
-David Hilbert
I just saw this today on Izismile, and while I'm not interested in testing it out, the post shows three examples of it working.  The picture claims: 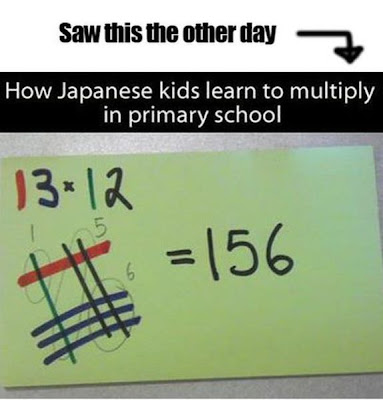 It was a bit puzzling to me until I worked it out.  They are using colors to indicate the location of the number (red for tens, blue for ones in the first number, for example).  They create a crosswork pattern with lines indicating the numbers by color, so the first number is horizontal, one red line and three blue.  Then the second number is vertical with one green line and two black.

Then the intersections are counted up, in a pattern like a % sign, the top left pattern has one intersection, the top right and bottom left combined equals five, and the final bottom right contains six.  You write those down in order and get the result.
Its a very odd, pictoral way to teach multiplication and while it has the advantage of being quite simple and graphic, which appeals greatly to some people, it has severe limitations.  For example, working with very big numbers requires a pretty large chart: 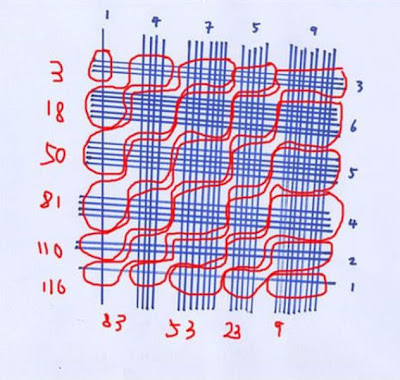 Second, if you want to multiply several numbers instead of just 2 you have to do it in a series of twos.  And finally, because you're not learning how to work with numbers, its going to cause some serious problems later when you get into more complex math like algebra.
Its interesting, though.
Posted by Christopher R Taylor at 8:50 AM