Come, Desire of nations come,
Fix in us Thy humble home;
Rise, the Woman's conquering Seed,
Bruise in us the Serpent's head.
Adam's likeness now efface:
Stamp Thine image in its place;
Second Adam, from above,
Reinstate us in thy love.
Hark! The Herald Angels Sing
Glory to the Newborn King.
-Hark, the Herald Angels Sing 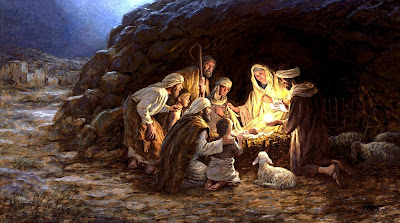 Merry Christmas to you, Sir!

Great post! I'm guessing you meant to write, "There is "noble savage" living in peace and harmony apart from the corrupting evils of civilization"

*"Shalom" means "peace" but it is much deeper than that. The rich concept of "Shalom" is the webbing together of God, humans and all creation in equity, fulfillment and delight; it's a universal flourishing and wholeness, a rich state of affairs in which needs are satisfied and gifts are fruitfully employed, all under the arc of God's love. "Shalom", in other words, is the way things ought to be.