"This just in, President Romney reflects hatred toward blacks and a desire to return to Slavery, Harvard study shows." 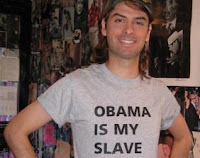 If I had to predict the media and popular culture's response to a Romney victory next week, I would say it boils down to racism.  I expect that the flood of "America the racist" stories, movies, articles, and so on will all begin to pile up rapidly should Romney wins.
Study after study will purport to show that America is full of bigots and that's why Obama didn't win reelection. And these studies don't have to have a lick of sense or scientific value.  Take a recent one highlighted by the Associated Press, which claims 51% of Americans are racist.  Stoaty Weasel took a closer look at that study and found that it was less than rational:

“Irish, Italians, Jews, and other minorities overcame prejudice and worked their way up. Blacks should do the same without special favors.”

If you agree with that, you’re scored as a racist.
Let that sink in a minute.
If you think black people are just as smart and capable as Irish, Italians and Jews, you’re a racist. Phwaw. Ready? Question two:

“Generations of slavery have created conditions that make it difficult for Blacks to work their way out of the lower class.”

Disagree with that, and you’re a racist. So if you think someone’s prospects are not blighted by something horrible that happened to his great-great-great grandparents, there’s just no other explanation for it: you’re a racist, sugar! The next three questions are pretty much variations on the “hard work = get ahead” theme from the first question. Here’s question six:

“Some people say that Black leaders have been trying to push too fast. Others feel that they haven’t pushed fast enough. What do you think?”

Yup. If you think the likes of Jesse Jackson and Louis Farrakhan aren’t doing black people any favors — racist! The next two questions are how much racism is there in the US, and how much of that is the fault of black people.

The entire study follows this pattern, and its a joke.  Only someone so radicalized in racial politics and far left ideology they can barely see would even remotely think that proves racism at any level.  The study isn't just poor methodology, its trash from beginning to end.  Its like having a study that asks whether you like carrots and deciding from your answer how smart you are.Expect a lot more of that thing to come up in the coming months
And note: even if you're a minority or black and you don't toe the leftist racial political party line, you're declared a racist with this study.  Its totally rigged to give a specific outcome, and the Associated Press ran with this story as if its a reasonable look at America.
The very idea that President Obama is facing any sort of presidential challenge to begin with has been declared racist.  And this is presented not as some crank or with analysis but just flat out as news.
The problem is, if you live in Holland or Japan or Tunisia, all you'll get is the final news story: more than half of Americans are bigots.  That, plus a flood of films and popular media all about how Americans are a bunch of bigoted klan members, and you figure it must be true.  The background or validity of these claims is never challenged, never even dug into.
That's why Europeans think Americans are racist fat criminals, because that's what they get inundated with on television.  This is similar to having American TV continually portray Mexicans as lazy drunkards who get around on burros and knife fight constantly.  Its not just false, its actually bigoted and deliberately slanderous.
But what is the left to think?  Its either this or they admit that maybe, just maybe America didn't like what President Obama did and how he's done the job.  Maybe Americans don't care for having the ACA rammed down their throats, the size of the Encyclopedia Britannica and unread by the people who voted for it.  And faced with that kind of choice, a weaker soul will cling at anything to avoid feeling wrong or mistaken.
So look for that in coming months, should Romney win - or even if he doesn't.  That's on top of all these news stories being rediscovered witha  Romney presidency:
And so on.  Because all the stuff they sat on or ignored while President Obama was in office will suddenly get interesting to the legacy media again.  Without a president to protect or even perhaps a Democrat majority in congress to shield, these stories will suddenly become newsworthy again.
The only question is, will the public notice this shift?  They seemed to be aware that suddenly all that stopped being covered so much when Obama was elected in 2008.
Posted by Christopher R Taylor at 9:54 AM