"…ah, but there’s no inflation. Everything is fine, everything is good. Just go to work, watch the half hour of the local evening news, and pretend like nothing’s wrong." 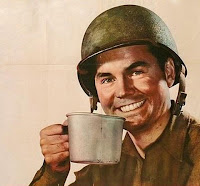 Jim Engel is an old school comic and cartoon writer and artist, a guy who's worked on just about every comic character you know and does a lot of cartoony stuff including some efforts with Ralph Bakshi.  Engel brings up something that has concerned me since Bill Clinton's saxophone playing and MTV appearance:


Regardless of party affiliation, I don't think U. S. Presidents or even candidates should go on late night talk shows, The View, SNL or any other shows of that type. Maybe I'm getting old, but I think it's beneath the dignity of the office.


Fuji Film and IBM have created a prototype cassette measuring 4x4x1 inches that can hold up to 35 terabytes of information, or about 8,750,000 songs. The data is stored on a strip of magnetic tape made from particles of barium ferrite.


Its not quite the same as your John Hughes film soundtrack mix tape, but its a wierd throwback to the old reel-to-reel systems from the 70s.


At least 27 Iowa landlords were allowed to make donations to the Iowa Civil Rights Commission in lieu of legal action for illegally discriminating against housing applicants, records obtained by The Des Moines Register show.

The deals, made by the Civil Rights Commission from 2006 through February 2011, helped landlords avoid charges after they were found to have illegally discriminated for reasons such as race, disability or family status.

In other words: we have found you guilty of discrimination, but you can pay a "donation" to us to avoid prosecution.  They were shaking down people using civil rights rulings to make money.
Feel like your dollar isn't going as far these days?  Benny Johnson explains why at The Blaze with 21 everyday items whose price has gone up over the last four years.  Its not just gas, it also includes these items:
Beer +25%
Eggs +73%
Coffee +90%
Peanut Butter +40%
Milk +26%
Bread +39%
Oh, but inflation is up by just under 4% according to the official numbers... which conveniently ignore gas, energy prices, and food.
Finally, here's this ad satire mocking Chevy and GM for their bailouts.  Chevy is trying really hard to sell its truck and car line as the choice of badasses and tough guys all around who get hot chicks to gaze admiringly at them.  The ad points out how pathetic the company was whining to the government to save them from awful business choices and idiotic contracts while boasting about how tough they are (some language warning).
And that's the Word Around the Net for October 26, 2012.
Posted by Christopher R Taylor at 12:32 PM

That Italian case is far more interesting than lazy American reporters can relate. They were indicted because they (or at least some of them, in press conference after a meeting) responded to local citizens' concerns about the ongoing series of tremors by telling them it was nothing to worry about. When people wanted reassurance and direction about whether they should leave their structures, some of these scientists on the government payroll told them not to worry. They also did not warn people of the inherent unsafe nature of medieval construction, which was apparently part of their job.

There is a lot more to the story as you can see from this story from Nature, which is not known for its anti-science bias.

If experts aren't accountable for their expert advice, then what use are they?