WHY THE POLLS ARE SO WRONG LATELY

"Finding and surveying a representative sample has become much, much harder to do."


I have read several interviews with pollsters saying roughly the same thing: we know our data isn't 100% accurate right now, but we're doing the best we can, because we get mostly Democrats answering our polls.  And data lately has been supporting this complaint. 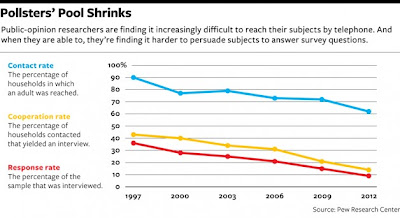 As I am registered independent every polling organization on earth is desperate to learn what I think on major elections (and every push polling politician thinks I don't know what I want to vote for), so I get a lot of phone calls this time of year from pollsters.  Its very annoying, and I hang up on them with only a very brief complaint.
For a long time I've figured most people answer and do the little poll to feel important, or wanted, or felt guilty about hanging up on someone, but lately it seems like I am not the only one that's annoyed with the calls, and with polls in general.
The Pew Research Center recently reported that about 90% of Americans refuse to answer polls.  In 1997, as the chart above shows, around 40% would answer a poll, and today, just around 10% do.  In fact, they are having a hard time even contacting the adult in the house.
There are a few things that make a difference here for pollsters.  First, many people have dumped their land line telephones and have cell phones instead.  Those are tougher for pollsters to reach, although not as bad as a few years back when I first wrote about this.
Second, caller ID has become far more standard than it was fifteen years ago.  You could get it then, but it was expensive and required a separate device.  Not many had it in 1997, but today its built into most phones and significantly cheaper.  If you see a number you don't recognize or clearly a polling organization, most people tend to skip it.
And third, many big polling companies are shifting away from hiring someone to handle polls in person and are using computer driven recordings instead.  Nobody likes those, except for the companies who use them (because they are cheaper than a person).  They not only are annoyingly impersonal, causing people to feel more comfortable just hanging up, but they often take so long to answer that you think nobody is there and hang up before they start talking.
Finally, I think people are kind of sick of polls.  We get hammered with poll results every day, we get inundated with pollsters this time of year, and the press treats polls as news; I don't think anybody really likes that except hardcore political junkies.  With the lower and lower opinion of news reporting, I think people just are tired of the polling and want nothing to do with it.
If Pew's data is representative - and I'm certain it is - of all polling companies, then that means their data is almost completely worthless, even as far as trends.  The sample is too messed up, too unrepresentative of humanity to get the job done.  And get this: houses registered to vote are even less likely to answer pollsters. The point of these polls is to predict how elections will turn out, but if most people - by a large margin - don't want anything to do with your polling, particularly people more likely to vote, then you aren't learning anything useful.
According to Pew's data, the more educated a household is, the less likely it is to answer a poll.  However, the poorer and more likely to be unemployed, the more likely you are to answer.  Also, minorities are more likely to answer a poll than whites.  The more connected to a variety of information sources such as the internet, the less likely they were to answer.  The more religious or active, in sports or volunteer work, the less likely they were to answer a poll as well.
In other words, according to Pew's data, the more Democrat you are, the more likely you are to answer a poll, but the more active and likely to vote you are, the less likely.  So the data being collected not only shifts heavily toward Democrats, but away from voters. So the polling information is nearly useless.
To me, that's great news, assuming it is broadly representative.  I have always disliked polling.  Its too easy to misuse, too easy to skew, and too often a method of manipulating rather than studying public opinion.  The whole idea of polling is to predict the future, like reading tea leaves or creating star charts.  Its nonsense which has recently been very carefully and systematically done to often coincide with what happens (but not always, and some polls are nearly useless, such as exit polling data).  The less we rely on these things, the better.
But what it also means is that these polling organizations aren't as excessively in the tank for the Democrats as it seems.  They aren't deliberately oversampling Democrats over and over again, they're just using the data they get which tends to heavily oversample Democrats.
And what it also means is that people are in for a big surprise come November, because what we're seeing in these polls has only vague, coincidental relationship with reality.  What exactly that means in the end, we'll see, but I think there's going to be a lot of shocked, horrified, and distraught faces on TV come November.
Posted by Christopher R Taylor at 8:33 AM