TELEPATHY AND THE BEAST WITHIN

"If the tongue had not been framed for articulation, man would still be a beast in the forest."
-Ralph Waldo Emerson" 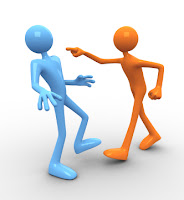 I have friends that are leftists, atheists, who hate cats, who think fantasy books are childish, friends who can't stand comic book movies; I have friends with all sorts of opinions opposite of mine. I get along with them fine in person. Every once in a while, we have a clash online, though.
The problem is I'll post something on Facebook critical of Obama or they will post something supporting him and off to the races it goes.  I will tend to let just "yay I love Obama" pass because that's just an opinion; its a bad opinion, but welcome to it.  But if someone posts anything like that asinine graphic claiming Obama spent less than Bush in office... well we have a factual problem and I feel as if I should correct that when I see it.
I try to be polite and patient after years of battling online and realizing it hurts your case to really cut loose with fury and disdain for your opponent.  Its easy to do, but counterproductive.  Not everyone has that position, and when some topics come up, people just fly off the handle completely.
We tend to behave online differently than in person, that's something people have known a long time.  Back about a decade ago when I used to chat on IRC, I'd find people telling me stuff they wouldn't even tell their own shrink, because I was so distant and remote, it was safe.  If you get into an online relationship, you'll find that you share things with each other that would take years to admit in person.  So you get a false sense of intimacy and a bond that isn't real by being so very personal and open.
Elizabeth Bernstein writes at the Wall Street Journal about this effect, how the way we behave online tends to lose us friends and alienate people.

"Think of it as a licensing effect: You feel good about yourself so you feel a sense of entitlement," says Keith Wilcox, assistant professor of marketing at Columbia Business School and co-author of the study. "And you want to protect that enhanced view, which might be why people are lashing out so strongly at others who don't share their opinions." These types of behavior—poor self control, inflated sense of self—"are often displayed by people impaired by alcohol," he adds.
...
Why are we often so aggressive online? Consider this recent post to this column's Facebook page, from someone I don't know: "Why should I even bother writing you? You won't respond."
We're less inhibited online because we don't have to see the reaction of the person we're addressing, says Sherry Turkle, psychologist and Massachusetts Institute of Technology professor of the social studies of science and technology. Because it's harder to see and focus on what we have in common, we tend to dehumanize each other, she says.

I think things appear to be worse than in the recent past because Facebook has made them more public, but I really don't think the rancor and incivility has changed much between the Bush and Obama administrations. People say the same things they were saying before, it's just that they now say it to 500 people at once instead of a small group of friends.