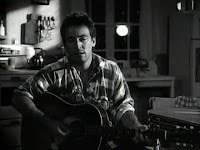 Bruce Springsteen is a very gifted songwriter and capable singer who sometimes can put out amazing work and often just puts out stuff that you nod at the skill but aren't that enthused by.  So you get Born to Run and Nebraska from the same artist.  His last really great album in my mind is Tunnel of Love, which is essentially the story of a man's relationship with a woman and how it begins and falls to pieces.  The songs repeatedly refer to how successful and rich the man is, and I suspect it is entirely autobiographical, starting with a song about how a guy has everything but the girl he loves, then ends with him being lonely and wanting love again.
Written and recorded about the same time he married for the first time to a backup singer from Oregon, a marriage that failed, it has a painful honesty and emotion about it that Springsteen often lacks with songs like "Blinded By the Light" and I probably could put the entire album up in this Songs I Like series because its great from start to finish.  But this song, "Brilliant Disguise" is one of the  most painful.
It is the point in a relationship where you realize that she's just pretending, that she don't feel what you thought she did, that she said she does.
All those words she said, all those promises, all that time spent, whatever it meant once, it doesn't any longer, and you know you're losing her.  And there are so many levels on which this song plays, its not just one theme.  The brilliant disguise could simply be that she - or you - aren't what you pretend to be to attract a mate.  It could be that they're struggling to keep the relationship together knowing its a lie.
And the horror of realizing this is true when you're married is something that would be a nightmare.  I've felt the awful pain of understanding my love doesn't really care for me any more (and found someone else), but what would that be like when you are married?  What does that commitment mean, what does the promise stand for?
And in the song, he admits he's playing a part, too, that it is false all around.  That the disguise is worn by both, and now he's full of doubt where he should be full of confidence.  Its a love song, but not a romantic one.  Its just a grim, painful study of love gone wrong.
I hold you in my arms as the band plays
What are those words whispered baby just as you turn away
I saw you last night out on the edge of town
I wanna read your mind
To know just what I've got in this new thing I've found
So tell me what I see when I look in your eyes
Is that you baby or just a brilliant disguise

Now you play the loving woman
I'll play the faithful man
But just don't look too close into the palm of my hand
We stood at the alter the gypsy swore our future was right
But come the wee, wee hours
Well maybe baby the gypsy lied
So when you look at me you better look hard and look twice
Is that me baby or just a brilliant disguise

Tonight our bed is cold
I'm lost in the darkness of our love
God have mercy on the man
Who doubts what he's sure of.

This is part of the Songs I Like series.
Posted by Christopher R Taylor at 9:20 AM