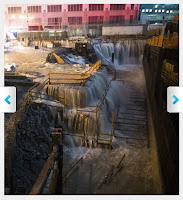 Hurricane Sandy, downgraded to a tropical storm, has hit America's Northeastern coast and its causing significant damage. Drudge report ran a shot of Manhattan completely blacked out at night from a power outage, and the flooding is expected to last days as the storm surge washes over low lying cities and the rainfall overwhelms local streams and rivers.
New York City saw a storm surge of 13 feet, well over the low docks and onto the streets, washing cars, dumpsters and debris across the city and severely damaging lower level apartments and stores.  The subways were flooded heavily in many parts of the city, and may take weeks to clear out.  Sludge and salt water has done severe damage to the city's subway systems and both Brooklyn and Manhattan are without public transportation for the time being.
Trees are down all over the Northeast, windows shattered, rooftops torn apart, old masonry weakened from water damage, transformers exploded blacking out neighborhoods, and hospitals lost power both from the main grid and backup generators, forcing evacuations.  As old buildings were worn by the water, some of them began to fall to pieces, entire facades collapsing into the flooded streets.
Casualties so far have been remarkably low, with only six known of in New York City, but from Virginia to Maine, power outages have spread and that is dangerous in the cold of autumn.  Over a foot of snow fell overnight in the mountains, and flooding is expected as far inland as Nashville as the enormous storm spreads across the eastern coast of America.
Landmarks, sand bars, and the coast has changed.  Some islands have disappeared, others have been created, and the storm's fury has altered land long familiar to residents.  At IziSmile they have a gallery of stores emptied out by people preparing for the storm, and it appears folks weren't being very discriminating in their preparations.
Now, the cleanup and repairs begin, and the people living in these areas need all the help they can get.  Donations to the World Renew organization (formerly known as CRWRC) are always safe and trustworthy, and there are some others who focus more on helping people in need than enriching their leadership and helping activist causes.
Posted by Christopher R Taylor at 9:11 AM