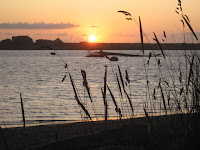 Well I'm back from Salishan on the Oregon coast.  Its always a nice stay over there, and this time I focused more on writing than reading.  Usually I take a bunch of books over and buy a few and just read nonstop, but I didn't have as many this time on purpose and could not afford to buy anything new.
I did read something over there though, a self-published book called Loose Sandhills by Mike Stone about the history of Salishan.  Apparently in the 60's the Lincoln City government was working on an idea of turning the sand spit into a small air field and expanding the Siletz Bay into a port.  The idea fell apart (the airfield is a bit further south in Gleneden Beach), which is good, and the environmental movement of the 60's and 70's resulted in a preservation effort for the bay and estuary.
Now, the bay is a natural protected area and the estuary is a wildlife preserve.
The overhead satellite view of the spit and its surroundings shows how fragile the thing is.  I'd point to the spot the beach house is, but it doesn't belong to me so that seems improper, but its along the more narrow part with the bay on one side and ocean on the other.
The views are spectacular from either side, framed with beach pines and that long, razor edge beach grass.  Herons, ducks, gulls, pelicans, sand pipers and all sorts of other birds are always around.  The manzanita and stunted pines are home to rabbits and other critters you spot once in a while.  Its very pastoral and beautiful despite being so developed.
Part of the reason is that the controls on this gated community are so strict (pdf): you have to take your house plan to the committee and have them check the architecture.  You are very limited on how you can paint or stain your home.  You cannot landscape without their very strict approval.  You have to leave it as natural as possible, with local plants, so everything seems to be just a part of the beach wilderness.  Even the houses take on that bleached driftwood appearance and blend in.  And it is always very quiet, other than the roar of the sea and the cry of the gulls.
Apparently at one point Phil Knight of Nike had a home there, and Robbins of the Baskin & Robbins ice cream chain had one.  Doubtless other famous people do, the homes there start at a million bucks or more, and the plots start at $250,000 or more.  And its not cheap to build there, given the gates and somewhat remote access.  It would be worth it, although there are problems.
In January of 1700, a gigantic earthquake shook the coast of Oregon, at what they estimate was a 9.0  on the Richter scale.  The exact location isn't known but scientists estimate that 50 foot waves pounded the Oregon coast, obliterating forests, native American communities, and landscape.  Something like that would simply erase Salishan and all those homes, and anyone in them.  The house has a tsunami warning clock and it is something on my mind every time I'm there, but the odds are pretty slim.
And for a while the builders had a problem figuring out how to deal with erosion.  Nobody can build on the beach, it is Oregon state law that all beaches are public.  Oregon alone has more public beaches than the entire East Coast of America.  The law states that all beaches are public up to a point sixteen vertical feet high from the low tide mark, which is quite a bit of territory.  And nobody builds very close to the edge of the beach grass, either, giving a boundary of some solidity.
I got quite a bit of writing done there, and even more research.  Other than research and then some blog reading on Saturday, I didn't use the internet much.  I watched the first episode of Simon&Simon (yes, its as good as I remember), I read up on a few things like the meaning of the term felo-de-se (obscure legal term for suicide) and background on the movie The Cowbows.  Remember that Mexican kid who played Cimmaron?  He's the somewhat sinister Native American businessman in Longmire, that was fun to discover.
So anyway I'm back, a bit more rested and with a few ideas on what to write about.  Thanks for coming to my blog while I was gone, the traffic didn't really drop that much, oddly enough.
Posted by Christopher R Taylor at 8:33 AM