REACHING OUT TO THE YOUNG LADIES

" It is useless to attempt to reason a [wo]man out of a thing he was never reasoned into."
-Jonathan Swift 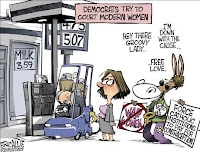 Yesterday I posted a picture of two girls smooching a big screen projection of Paul Ryan, the VP candidate for Mitt Romney on the Republican ticket in America.  I posted it partly because I thought was silly and fun in one sense, but also because I thought it was odd.  Not only is it strange to me to have girls that excited or interested in a politician but generally speaking 20-something girls are Democrats.
Like with most minority groups, the Democrats have been very successful not so much selling their ideas and proposals to young women as terrifying them about Republicans.  Republicans are old, Republicans are out of touch, they are boring, religious, restrictive, mean spirited, they'll ban sex, they'll force you to be barefoot and pregnant, yadda yadda.
And since most younger people tend to be left-leaning politically, the sale isn't hard.  Lately the "GOP is old and awful" claim has been more difficult to pull off, while the "Democrats are young and hip" line is harder, but they still are managing.  Most of the help comes from celebrities who tend to be a bit vague about politics and easily swayed into the left, which gives that side of politics a sort of exciting vibe.
But it is very frustrating for me, not so much opposing the Republican Party - I'm not a member and have problems with them as well - but that young women are so easily manipulated by the left.  The fact that Sandra Fluke's outrageous testimony that her employers were morally wrong for not paying for her contraceptives (let alone as much as she demanded) appealed to anyone whatsoever saddens me greatly.
The whole "war on women" approach is so crass and transparent, it is such obvious pandering, yet it works.  The tweet by someone that Mitt Romney wanted to outlaw tampons should have been laughed off of the internet, but people took it seriously and passed it around.  If I challenge anything the left claims on facebook, several wives of guys I know - left leaning young women - go ballistic, and I'm certain a couple think I'm a horrible person now when they used to like me.
It isn't so much that their arguments almost completely lack merit, I don't expect them to be great at debate and logic, that's not their thing.  Its that they were such mindless shills for the left, that they didn't even try to understand, that they've only got one perspective and hate, hate, hate anything else.
From a feminist perspective women should want to be more individual and not have big government as daddy.  They should reject the image of the helpless woman who must rely on government as if they're some 1950s wife relying on the hubby to handle everything.  Its pathetic and the antithesis of what feminism claimed to want.
And I'm stumped how to deal with this.  I've asked several times how to get young women to move away from that pattern, to mature intellectually and move away from the simple, even infantile solutions the left proposes.  The answer I usually get is "get them married" and there's something to that; a man around does tend to change women's perspective.  And certainly some responsibility and stability does wonders for making the right seem more reasonable.  Even Madonna talks about how she wishes her daughter wouldn't dress so trashy.  But as I said, some married women stick with this perspective, at least in their 20s and early 30s.
There's a lot of talk about how to get minorities to realize that the Democratic Party is destroying them and their families, that it has been a nearly total set of lies sold them and that their policies are usually the opposite of what minorities claim they prefer, especially for social issues.  But how do we reach these women?  Is it even possible?
Men will joke about how women are irrational, and while there's something to that - and something to women claiming men are just grown up boys, etc - you can be irrational and recognize that having the government controlling your life is a bad thing.
I just don't know, and its frustrating because the world is not a better place with Democrats in charge.  If they want security, comfort, stability, and freedom Democrats in charge are the worst choice.  I'm not saying Republicans are a good choice, but they are at least a less worse choice.  And what's worse is that everyone else suffers along with young women when they help the wrong people get into power to make the wrong policy choices.
Mostly, though I guess I'm frustrated at the injustice and irrationality of having emotional appeals and such obviously false pandering be so successful.  It just isn't right that someone can lie and play tricks to win, they should, ideally, suffer crushing, humiliating defeat every time.  And I mean that for any politician.  I didn't care for the whole "Obama cut billions from Medicare" approach that Romney and Ryan used - it wasn't true, as I said at the time.  At best, he redistributed billions, because that money would be picked up by Obamcare, so in theory at least it wouldn't make any difference to recipents.
But that's the world we live in.  We live in a world where lies work, where justice is rare enough to be a surprise, and where pandering is successful because people want to be lied to, want to be treated as special, and prefer comfortable emotion over sometimes painful truth and reason.
It just would be nice to find some way to reach out to these women more successfully, to help convince them, to help them understand.  Or at least to help them realize disagreeing with someone's politics doesn't make you evil.
Posted by Christopher R Taylor at 12:20 PM

The birth control pill issue, equal-pay, respect for traditional gender roles... those are all just tiny side issues for most women I know who vote for Democrats. Republicans could flip on all those issues and they still wouldn't vote for Republicans.

With most women who vote for Democrats, its about abortion and nothing else. If it weren't for otherwise conservative women who won't vote for Republicans because of abortion, the state of Oklahoma probably wouldn't even have a Democratic Party.