“Well, Clark Kent is a benevolent Kryptonian who has x-ray vision and can fly, but what strains our readers’ credulity is the part where he has a paying newspaper job at the Daily Planet. Readers like realism.” 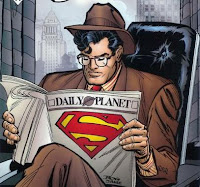 Superman was the first comic book superhero ever printed.  There were superhero types before him, such as Gilgamesh and Finnish hero Lemminkäinen, and there were sequential images used in storytelling (primarily Medieval but also in Egypt) in the past, but nobody had combined the two concepts into a single coherent story before Siegel and Shuster in 1938.
Superman soon was revealed to be a reporter a the Daily Planet, which was a logical step: it gave him access to news stories, a reason to be around trouble, and contacts with cops, politicians, and so on which would give him the information he needed to solve crime.  That image of the mild mannered reporter Clark Kent has become iconic, and he's been a reporter almost continuously for 75 years.
On occasion, Superman has left the Daily Planet, but only for short periods of time.  Each time he's done so it has been because of problems with the news business.  In the 80s he became a news anchor at the TV station the Daily Planet ran, because newspapers were old fashioned.
Today, he's leaving the paper again.  Part of this is a publicity stunt - DC wants to sell comics, and Superman is always a tough sell because of his concept (how do you challenge him without destroying the world?).  Part of it is an attempt to keep the character current and relevant.  Lets face it, newspapers are pretty well dying and the target audience for comic book customers may never have read a newspaper in their lives.
Further, the very concept of how newspapers work and what reporters do negates the value of that position.  In the 1930s, the reporter was a ground-pounding street hound who traveled to news stories, had contacts all over the city from criminals to bums to night club singers to businessmen, cops, and even the mayor.  Depending on their "beat" or special focus, they would have an an array of people to rely on for tips, background information, and story leads.
Today, the reporter tends to get their story from a wire service, Drudge report, and bloggers.  They don't do much ground pounding, and unless they're on a political beat, they don't run around with a mic interviewing people.  Newspapers run press releases with little to no editing straight from groups they like, recycle stories from other sources, and even run outright inventions like the work of Phillip Glass and Jayson Blair.
Superman isn't happy with his work at the Daily Planet as Clark Kent any longer.  Mark Hughes writes in The Telegraph:


Kent is summoned to the office of Perry White, the Planet's publisher, and given a dressing down for his lack of stories.
When Kent complains that it has been a "slow news week" he is told, by Lois Lane, now a television producer, that it is a poor excuse, prompting him to begin a rant about the state of modern journalism which ends with him quitting the paper.
"Why am I the one sounding like a grizzled ink-stained wretch who believes news should be about – I don't know – news?" he asks.
His question prompts White to respond with a devastating critique of newspaper journalism: "Times are changing and print is a dying medium.
"I don't like it but the only hope we have of delivering any news at all is to give the people what they want to read and God help me if a front-page story about some reality star gets them to pick up a paper and maybe stumble on some real news " the publisher continues.

Personally, I'd have more problem with how most newspapers have become little more than a publicity outlet for the Democratic Party in America, such as this bit from Megyn Kelly at Fox about the press room erupting with cheers and laughter at the debate for President Obama's condescending and ignorant line about bayonets and horses.
But what's bothering Superman is that he's got integrity, honesty, and a drive to do the best he can at everything.  And what he wants to be is the best reporter possible - which can't be done in a modern news setting.  So Clark Kent is probably going to end up working solo or for an online conglomerate like Huffington Post, according to Scott Lobdell, the writer.
Lobdell is presenting this not as a man who has integrity and is troubled by the business, but as a spoiled arrogant jerk who can't stand being told what to do:


"This is really what happens when a 27-year-old guy is behind a desk and he has to take instruction from a larger conglomerate with concerns that aren't really his own," he said.
"Superman is arguably the most powerful person on the planet, but how long can he sit at his desk with someone breathing down his neck and treating him like the least important person in the world?"

Which is completely out of character for Superman as he's been depicted for three quarters of a century.  But comic book writers being out of touch with heroism, virtue, and the history of their medium isn't a sudden event, its been going on for decades now.
Quite honestly, a reporter isn't really the right job for a superhero to get what he needs any more.  And since the news business has changed so much, its odd for him to be doing to begin with.  Also, the very concept of superheroes has changed.  Superman used to fight crime in Metropolis, now he fights alien invasions world wide - so much so that in a sort of "what if?" portion of a recent comic, Superman renounced his American citizenship.  Superman has become so vastly powerful that fighting gangsters seems like bullying them.
And superheroes in general have gone from reactive support for law enforcement and vigilantes to a sort of quasi military force to obliterate their foes.  Few of them actually work to fight crime, they're mostly just after super villains and involved in vast sweeping epic stories.  Even guys like Spider-Man and Daredevil who are "street level" heroes rather than cosmic guys like Silver Surfer or the Green Lantern end up fighting mostly supervillains and dealing with weird stories instead of saving lives and stopping crime.
Further, their work is more about revenge, anger, and response to trouble than patrolling and trying to stop bad guys its more about horrific events that drive the characters into a rage which causes them awful sorrow and bouts of violence against the perpetrators.  Sort of like perpetual 1980s action movies.
So the whole Superman structure doesn't really fit what comic book artists and writers do these days, and its not surprising that its being changed.  And like I said, DC needs to move comics, so they're pushing any change or event like this as much as possible for publicity.
Posted by Christopher R Taylor at 9:35 AM