“...it was well known that, were I to go, I would probably take half the station with me.”
-Jimmy Saville 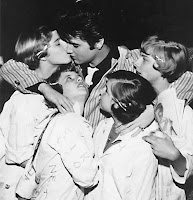 Dollymop is a victorian term for an underage prostitute.  Forced into the work by men and women in deep poverty, the virgin girl was viewed as a special treat to some loathsome Victorian era men, following an old pattern established millennia before Queen Victoria was even born.  As I wrote about a few years ago, some men at the time claimed that sleeping with a virgin would get rid of a social disease.
As late as the 1970s underage girls were considered sexual prey, especially by rock and roll stars who'd bed young teen groupies and fans and write songs about it such as "Sick Again" by Led Zeppelin, "Good morning little schoolgirl" by Rod Stewart and others, "Stray Cat Blues" by the Rolling Stones, and "Jailbait" by many bands.  This trend goes back to the beginnings of Rock and Roll with Elvis Presley meeting and bedding Priscilla when she was 14, and Chuck Berry being busted trying to transport an underage girl across state lines.
Today, movies like Pretty Baby don't get made any more and the whole sexy little girl popular culture trend has died away but its showing signs of coming back. The sexualization of younger and younger girls in clothes, language, behavior, and cultural attitudes is all around us, much to the dismay of parents and usually younger girls.
But all of that presumes some sense of agreement, a sort of consent between the girl and the older man even if she's not really prepared to make that sort of decision.  At least she thinks she's agreeing with the liason in these cases.
Not so much in the Jimmy Saville situation.  Jimmy Saville was a beloved TV icon in England, a star for the BBC who was a fixture on shows such as Top of the Pops and was well known for his charitable work, especially for hospitals.  Saville was one of those guys everyone respected and admired and when he died, it was discovered he wasn't all they thought.
In fact, it appears that Saville was a horrific monster.  Neil Tweedie and Tom Rowley at the Telegraph write:

The number of people alleging sexual abuse at the hands of Jimmy Savile from the 1960s to the 1980s now stands at some 300. The vast majority were children at the time, young teenagers, girls and boys, groped, fondled and raped. History is being hastily rewritten. A year on, and the pop pomp of that funeral in Savile’s native Leeds appears worse than a bad joke, a travesty. The DJ who flaunted his friendship with the Royal family, who gave marital advice to Charles and Diana, who spent Christmas at Chequers with Margaret Thatcher, who posed for a photograph with Peter Sutcliffe, the Yorkshire Ripper, was, in all probability, one of Britain’s most prolific paedophiles. He was a man who could barely contain his perverse sexual appetites, even to the extent of assaulting a young woman on the terrace of the House of Commons in full view of MPs. He proudly related such exploits in his 1974 autobiography, yet managed to escape retribution until his death in October last year at the age of 84.

Saville in particular liked a hospital ward for brain damaged girls.  He bragged about having a bedroom there, and was given free rein in the place to do whatever he chose because of all the charity money he'd pull in with appearances.  He molested girl after girl helpless in hospital beds, and there are even reports he'd supply other people with girls - even government officials.
There were accusations, the police even became involved in a sexual assault case at the BBC.  People saw him and would bring it up, but nothing was done.  Not only were victims very reluctant to speak up, but the man was so beloved and powerful in entertainment, had such powerful friends - including, likely, authorities who didn't want him giving evidence against them - that he'd just be released without a problem.  People were very reluctant to accuse the man of anything because they knew it was the end of their job.
Its almost certain that the BBC leadership knew of Saville's exploits, since he barely tried to hide them.  After a while he seemed to realize nothing was going to be done to him.  The police got repeated reports of problems, but no case was ever built.  The officials at Stoke Mandeville Hospital in Buckinghamshire, the Broadmoor secure psychiatric hospital in Berkshire, and Haut de la Garenne, a girls school in Surrey had to know what was happening but did nothing to stop him.
Saville was warned by police in the 1980s to stay away from girls, and like Michael Jackson the accusations swirled around him but he managed to stay above it all and was loved anyway.  The BBC, not interested in having a star besmirched with these sort of rumors, just didn't bother reporting any of it.
Unlike Michael Jackson, though, it appears that Saville isn't being treated as a deceased icon, a saint beloved by millions and sanctified by dying.  Jackson, whose recording career basically died in the 90s, suddenly became super popular and loved by the media again after death, washing away all the sordid and disturbing accusations of child molestation and evidence of something very odd at the very least going on in his life.
Saville's awful past came to light only because of an ITV investigative report, and was forced to light by the channel - a BBC competitor.  Now it appears the man's reputation and past is destroyed and he won't be treated the same way as Jackson.

But the truth is, the lust for young girls has never really gone away.  Something not mentioned much in these reports is the ages of the boys and girls, but it appears they were under 18, yet teenagers.  And that kind of predator has always been among us.  What changes is the social acceptance of such behavior.  Sometimes it is winked at, such as the teenaged groupies, and sometimes it is just part of the culture, such as more ancient times.  We seem to be heading into another one of those times that preying on underage girls are shrugged at, maybe even to the point of being accepted.
Posted by Christopher R Taylor at 8:12 AM