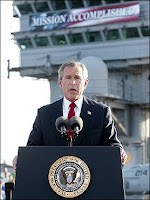 There are an enormous number of myths about the War on Terror and specifically the invasion of Iraq which are simply repeated and circulated without question or thought.  Most of them arose during the invasion its self, primarily from speculation by news sources and Democratic Party talking heads trying to undermine the popularity of the president and the war effort.
An unfortunate aspect of human psychology is that if enough people repeat something forcefully enough, long enough, even strong willed folks begin to doubt themselves.  Can all those people be wrong and me right?  Can it really be false if all these authoritative sources keep saying it?  Who am I to march against the crowd, they all say it is so, is it not arrogant of me to disagree?
So the Big Lie, as it has been called in the past, grows and takes hold.  Not because of evidence, logic, or truth, but because it becomes common knowledge, something everyone says and assents to without most having any idea about its validity.  In time, even the people who know it to be untrue - or at least reasonably doubtful - begin to believe it.
And worse, because that untruth becomes a new factoid, it then becomes a baseline for other untruths to be built off of.  Eventually a whole structure of lies and misconceptions becomes established, and people rely on that to gain and hold power.  Questioning or undermining one part of that throws doubt on all of it, threatening their power and income, so they fight back, hard.  It becomes less about the facts than about personal survival and achievement.  Instead of arguing for the truth, the debate becomes personal, and nasty.
Blogger would deny me the bandwidth and memory to contain all of the lies, arguments and clarifications that would be required to do an exhaustive detonation of all these myths.  Entire books have been written about many of them, trying to clear up the mythology.  Wikipedia for a decade has been a battleground on the issue, with attempts to clear things up and attempts to muddy the waters and maintain the myths.
All I'll do here is a quick series of clarifications, taking each myth and trying to straighten them out fast and with minimum information for the sake of clarity, space, and ease of reading.  Each deserves significantly more length, but by this time people are so sick of the arguments its just not worth it.  Please bear with me, though.  The entire body of misconceptions around the Iraq invasion is one of the greatest myths of our times.
Myth 1: The Rush to War.  The fact that this even exists proves the insanity of the entire debate.  A rush to war is when someone pushes and pushes to get into the conflict as fast as possible, taking weeks or days at most.  A rush to war is what happened when President Obama over a golf trip decided to attack and bomb Libya.  President Bush first mentioned the problem with Iraq's terrorist ties in the State of the Union address on January 29, 2002.  From that point on, the administration began building a case to invade Iraq to deal with many outstanding issues (see below).  The actual invasion took place after bringing the case to the American people, the US congress, NATO, and the United Nations repeatedly and the first troops attacked finally in March 20, 2003.  Now, perhaps 10 months is a rush to you, but that's longer than a pregnancy, and its no rush to me.  There was no "rush to war."  If anything, the effort took too long.
Myth 2: Daddy's War.  Critics have claimed, among other things, that Bush only wanted to invade Iraq because he was mad at them for trying to assassinate his father, and considered it unfinished business.  Bush was portrayed as a petulant child, trying to get the bad man who hurt daddy.  However, the case for the invasion of Iraq was laid out for month after month, and the attempted assassination of former President Bush the elder was never brought up.  The assassination attempt was certainly cause for some action which the Clinton administration never took, but it wasn't used as a pretext for war, except by critics.
Myth 3: Iraq and 9/11. Critics also claimed that Bush lied, saying that Iraq was tied to 9/11.  They said that Bush claimed Iraq was behind the 9/11 terrorist attacks, so we had to invade there, too.  The fact is, that never happened.  President Bush never said any such thing, he never implied it.  None of his administration ever made such a claim.  All they said was that global terrorism was out of hand and resulted in things like the 9/11 attack in 2001, and that Iraq was a major hotbed of terrorism that had to be dealt with to stop these sorts of attacks.  The closest thing anyone can find to such a statement is this by President Bush:

“Oh, indeed there is a tie between Iraq and what happened on 9/11. It's not that Saddam Hussein was somehow himself and his regime involved in 9/11, but, if you think about what caused 9/11, it is the rise of ideologies of hatred that lead people to drive airplanes into buildings in New York.”