BEHIND THE SCENES AT WORK

"Remember: this isn't about what seems fair to you, but what seems the best business decision for the employer." 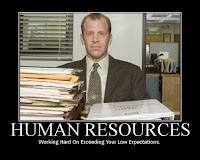 Economic principles apply in all sorts of life settings, more than just buying and selling.  For example, when you look for a job, you're facing supply and demand pressures.  When unemployment is very low, businesses are struggling to fill the positions they have and are forced to take what they can get.  When unemployment is very high, there are plenty of candidates for each position, and businesses get really picky.
This can be especially frustrating for a jobless person, because it means that you get passed over for other people who have experience, the looks, the gender, etc that the business is looking for.  As a business, it only makes sense to take the best possible candidate you can get.
There's an article up from Reader's Digest at Yahoo news that gives some secrets to hiring that you generally aren't told by employers.  Most of these tips are for serious careers, not a fry cook job at the local greasy spoon, but some apply universally.  For example:


1. Once you're unemployed more than six months, you're considered pretty much unemployable. We assume that other people have already passed you over, so we don't want anything to do with you.

This is an unfortunate fact.  The longer you go, the more unhirable you look: why didn't anyone else want you?  If your time off was for a reasonable excuse, such as "I was pregnant and raised my kid a few years" or "I was lost at sea and was 18 months in rehab" that tends to help.  But if you just haven't been able to find work for a while, it hurts your chances.  Its like being a single person for years at a time, potential mates often will wonder what's wrong with you that you couldn't find someone.
Another secret is this one:


When it comes to getting a job, who you know really does matter. No matter how nice your résumé is or how great your experience may be, it's all about connections.

This is something your high school guidance counselor won't tell you, but its very true.  A corollary to that law is that big companies and government organizations tend to hire from within. They'll post the job as normal, but usually hire someone who moves from a different department or another office.  Why?  Because they know the people involved, are tried and reliable in the business, and the paperwork is easier.
Other secrets are a bit less reasonable, but all too real.  If you are bald it doesn't hurt you these days as much as it used to - people started shaving their heads more after Michael Jordan did it.  But if you're fat, yes, it will hurt you.  Employers see that as a sign of sloth and possibly health problems, and frankly a lot of businesses are filled with people fixated on personal appearance, sexiness, and time spent at the gym, so they are snobs.
Another thing that hurts you is age.  The older you are, the less easy to train, the more out of touch, and the less relatable you'll seem to employers.  Most of the people running HR departments and hiring are in their 20s and 30s, and they think someone who is 40 is ancient and nearly dead.  The HR guys in this article suggest not putting the date you graduated on your application or resume.
If you have young kids, that's going to hurt you too.  This is a bit more understandable from the perspective of the business, but its illegal to ask about.  An HR woman relates:


"One woman kept a picture of two really cute children on her desk even though she didn't have children [hoping job candidates would ask about them]. Another guy used to walk people out to their car to see whether they had car seats."

Why does it matter?  Because if you have infants and toddlers around not only will you be more fixated on them than your job, but there's an extremely high probability that you'll be missing work to deal with their problems.  Even if its just long phone calls and distraction at your desk, that's reduced productivity that they would be getting from someone who didn't have kids.  Being unable to find sitters, health emergencies and so on all mean you're more likely to have to take time off work or spend time frantically finding someone to help out instead of working.  From the perspective of the business, that's not a very good hire.
And as I've written about in the past, your internet follies will come to haunt you today.  Posting stuff on facebook that is shocking, insulting, or even potentially criminal (here's a pic of me smoking some killer ganja!) will be found by potential employer.  Posting "I'm glad I left that job, my boss was a jerk so I left a bag of dog crap on his desk!" will get you no jobs in the future.  Having an email address, as the article notes, that is immature, insulting, or depicts you as a wild party animal will hurt you as well (kinkyboots101@hotmail.com or johnnylikestodrink@gmail.com, the article gives as an example).  If you want a serious job and to be treated as an adult, you have to act like one.  Looking for work is hard enough without acting like an idiot.
As for the stuff about resumes, its not bad advice (especially the "avoid color" part), but that's been written about a lot already.  If you're not trying for a job at the local theater or art design shop, keep your resume as simple, professional, easy to read, and clear as possible.  Keep it under 3 pages because the HR guys are dull and lazy as any other worker on average.  Use buzzwords, especially from the job announcement, to help catch the eye of your average middle management drone.
Overall though, the only real way to get work from my experience in the past is persistence, just keep hitting the streets and working at it like at least a part-time job.  Focus not on results, but on how well you're doing your end, which is to attract an employer.  If you focus on results, all you'll get is depressed and miserable.  You will eventually find work, but its going to take a lot of effort on your part.  Just be aware that any job is better than holding out for the perfect job.
Posted by Christopher R Taylor at 9:17 AM

One thing they don't mention that I have found to be true, both as someone seeking a job and someone hiring people: If you are a married father with a wife who stays at home to raise the kids, it increases your chances of getting a job.

Single parents are often a nightmare to manage from a business-owner's perspective. But singles who are not parents can also be problematic. They often aren't as concerned about financial stability, so if the job gets hard they may just walk away. They are more prone to coming in late and sluggish because they stayed out late the night before.

Dads looking to take care of their family are generally motivated to establish themselves in your business and find security there by making themselves indispensable, and they have an excellent support system at home to allow them to be focused on work when they need to be.

This is also true to a degree for mothers, but stay-at-home-dads just aren't as common.

Great point, and it makes sense. Plus, if the wife is home with a kid, that means no problems with sitters etc.