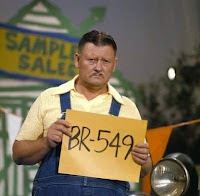 America the fat is one of those myths I've attacked in the past - to summarize, its not true, and fat is being redefined down to absurd levels.  But there are fat people in America, and according to a new study, most of them are in rural areas.  Julielynn Wong at ABC News writes:

A national study in the Journal of Rural Health of over 8,800 Americans showed that country folks were nearly one-fifth more likely to be obese compared to those living in cities. In other words, the findings suggest, where you live is important in obesity.
"The rates of obesity were much higher than previously reported based on self-report, with 39 percent of rural Americans being obese compared to 33 percent of urban Americans," said study lead author Christie Befort, an assistant professor in the Department of Preventive Medicine at the University of Kansas Medical Center in Kansas City, Kan.

Unlike a lot of these studies, I find that plausible, even likely.  Rural folks have different values and ideas that they hold important than urban folks, on average.  Being lean, fit, and sexy is not a particularly great priority for rural people.  They don't go clubbing or get a job based on how ripped their six pack is or how great they look in that little black dress.
Now again, their definition of "obesity" is based on an absurd measurement that fails to take into account different body types and muscle mass, and it assumes that rail-thin skinny people are innately healthier, something most doctors seriously question these days.
But what gets me is this is immediately assumed to be a bad thing.  Rural people are fatter.  If you're a rural guy, you probably started to feel defensive.  If you're urban you probably started to feel superior.  Look at how guys like Chris Christie, Governor or New Jersey are  attacked.  They rarely go after his policies, he's just dismissed for being overweight.  They don't use it so much as an attack as they do simply dismiss him for being insufficiently lean.
Its the new, body-conscious, sex-obsessed hedonist western culture version of the appeal to authority fallacy.  You're wrong because you're fat.  Being fat is wrong and stupid so what you say must be wrong and stupid, too.  Someone who is fat cannot be taken seriously, anyone over a certain body fat percentage is innately inferior, wrong, sinful.
Its hilarious to watch, and yet sad at the same time.  This doesn't come from any objective rational analysis, its based on the idea that you are less likely to get laid if you're fat, so you must be inferior.  In a culture without objective, absolute ethical standards, good and evil become based on pragmatism.  In ancient times and uncivilized cultures, being unable to hunt well made you a loser (and probably dead).  Today, the hunt is for sex and glamor, for being considered hot and interesting.
So now, if you aren't sexy and hot and attractive, then you must be wrong somehow.  You have a beer gut?  You must be damaged, sick, weird, stupid, sinful.
Sure, being grossly obese is bad for your health in a host of ways.  Sure, if you don't take care of yourself, there may be something wrong with you.  But being overweight does not mean you're morally wrong or inferior as a human being.  It might even make you easier to be around, because you're possibly less obsessed with yourself and miserable on diets.
Posted by Christopher R Taylor at 10:17 AM

I don't have a problem with a little shame being used to try to get people to manage their fitness a little better. It is true that a lot of the disease and healthcare expense in the US is caused by people not looking after their health. I agree that the "scientific" standards for what constitutes obesitiy are out of whack with reality, but it is still true that we have more access to cheap and massive calories while at the same time being more sedentary than we've ever been as a nation (or as a species, for that matter), and we have problems that arise from that. I don't want the government getting involved, but I sort of feel like we've gone TOO far in the direction of "be proud of your body no mattter what it looks like".

The only thing I find offensive about the article is that they make it out like rural people have a large disparity in obesity vs. city folk. According to the statistics in this study, if you gather 100 people from a rural population and 100 people from a larger city... the rural group is going to have 6 more fat people in it than the urban group. That's hardly even worth noting. If it was a 20 or 30% disparity, sure, it's news... but this is just a silly thing to report about.

Welcome to the culture of the perpetual teenager.

ed in texas
Here's where it's aimed to go: 'We're all using a limited pool of resources and by being overweight you've used to excess and then will need to more resources for the health problems it'll cause. You're GUILTY!'
The perfect facist state.