"People are evaluating them more and being more critical."


The global warming hysteria bubble popped in 2009.  That was the year the climaquiddick emails came out and people realized that it wasn't actually getting warmer, and hadn't been for about a decade.  Before that the momentum had built and built, with ideas previously considered absurd being seriously considered by government officials.
So corn ethanol subsidies were passed and cap & trade was debated in the US congress.  Al Gore won an oscar and a nobel peace prize.  Things were looking up for the green types.
And its all fallen apart.  The lies, deception, distortion, and deliberately fraudulent work done by climatologists combined with the hypocrisy and blatant snake oil con man behavior of global warming hysterics has worn out their welcome.
Although "green" advertising mostly annoys customers and has not been very successful in terms of sales, products that were considered environmentally friendly had been.  Lately?  Not so much.  Advertising Age put out this info graphic to help illustrate a recent study: 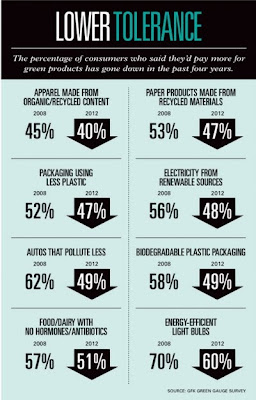 Why is this taking place now?  Well one obvious reason is the economy.  As I wrote about a few years back, people can coast a while on their previous wealth, using up resources and stored supplies in order to not change their lifestyle.  You can keep getting those Starbucks' coffees and your top end cell phone plan for a year or two after losing your job, but once your savings is eaten up and the stuff in your cupboards runs out, you have to start cutting back to afford basic necessities.
So after four years of depression, people cannot keep up spending like they did.  That means you buy ordinary carrots instead of organic, you drop the PGE plan to spend a bit more for electricity from "renewable" resources, and you stop buying energy efficient stuff because it costs more.
Another problem is that the bombardment of "we're all going to die" has tapered off as interest and belief in some climate doom has faded.  So people feel less guilt for not buying biodegradable plastic and energy efficient light bulbs.  Without that societal pressure and the shame for not doing it, consumers will tend not to.  Plus, the novelty of buying "green" has worn off, so you don't get the positive social reinforcement for bragging about it that once was possible.
Advertising Age has some additional analysis:

Much of the fault for the consumer pushback lies with marketers for over-hyping green products and making overly aggressive claims. "You have this kind of heightened distrust," said Diane Crispell, consulting director at GfK. "Consumers have become hypercritical. You see it with green and health claims."

It is hard not to feel as if you're being ripped off for paying extra money for the same product, with the promise that its "greener."  And certainly the idea of being green has been falsely used in the past.
British Petroleum, for example, made a major shift in the last decade to seem more "Green" with ads showing blooming flowers and the sun shining down to provide energy, even changing the BP logo to be like a green flower.  The company was no different, it just wanted to seem different; ultimately it was responsible for a horrendous oil spill in the Gulf of Mexico a few years back which tarnished its image somewhat.
I'm all for people taking care of their environment, and its up to individual people how they spend their money in a free market but the whole "buy our product because we donate to Al Gore" movement seems to be on its death bed, and that's a good thing.  It was never about saving the environment, it was all about selling more products.
And efforts like power companies offering customers "green" energy for a higher fee were just ludicrious to begin with.  They didn't have a separate tap that reaches your house with green neon glowing energy that came only from windmills and solar panels.  Its all the same electricity on the same wires.  What you were doing was subsidizing them building these generators which are unable to provide sufficient power for the needs of modern civilization.  The energy is no "greener" from your outlet on the wall.  They don't have a tank of "renewable" energy they store separately, it all goes in the same batteries and along the same wires, like mixing gasoline and water into your gas tank.  It all ends up together and into your engine.
People should approach this whole "green" movement with a heavy level of skepticism.  Most of it is about manipulating society and politics, much of it is about getting rich off your gullibility and a cultural movement, and very little is actually about stated goals of 'saving the planet.'
Posted by Christopher R Taylor at 10:35 AM

Yeah. I view most of the "green" marketing as a scam. I used to own BP stock, but when they started running that goofy rebranding campaign, I dumped them. I will not invest in a company that is ashamed of what they do.

I'm more of an accidental environmentalist. Because I'm a tightwad who tries to live below his means, I end up paying attention to efficiency and conserving resources; starting with my own money.

Because despite all the hype, companies tout "green" to get you to consume more; not really good for the environment.