"Three years ago, this week, a newly elected President Obama faced the American people and he said, look, if I can't turn this economy around in three years, I'll be looking at a one-term proposition, and we're here to collect! You know the results. It's been 35 months of unemployment above 8 percent."
-Mitt Romney 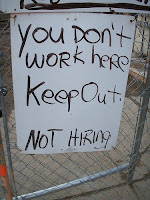 Another day, on the street. Tanya drops me off and heads to her job -- thank God she has the part time gig at Wal*Mart -- so I have to walk. It probably does me good; I was getting a bit of a gut anyway and she always teases me about it. Today it's Cordon street, up one side and down the other through all the commercial district.

I hit every store, no matter what they do. I used to target places looking for work, try to tailor my search to what I was trained in and had experience for. After a couple months, it was obvious that wasn't going to find me a job. So now everywhere, from McDonald's to art studios to tattoo parlors. It doesn't matter, as long as I can find work, somewhere. Anywhere. I've taken one street a day in town here, most of them take me about four hours to complete. By the end I'm sure I'm a mess; sweaty and tired and dusty, but I hit them anyway, and hope they understand.

Most of the places aren't even giving out applications any more. They all are sympathetic, even if they're a bit short because they are busy. I'm too old. I'm too experienced, overqualified. I don't have any experience in the field. They're a family business. They'd like to hire, but dare not in this economy. I've had them blame presidents and congressmen and local politicians, I've had them blame immigration and China and the corporations, but it all comes down to this: nobody wants to hire a 50 year old engineer.

I did have a job for a while, a part time position washing dishes at a little restaurant. The rest of the staff was Mexican, and they would give me a hard time about not speaking Spanish, but they worked as hard as me and were good-natured about the job. Then the place shut down. The owner was crying, watching his dream collapse. He said he just couldn't afford to keep it open, it was too expensive and business was drying up. Seven months before that looking for work, three months at minimum wage, and now I'm back on the street.

So I take the bus home and on the way I fight the pain. After eight months now I can't help wonder if its just me. Maybe I never was as good a worker as I thought. Maybe there's something wrong with me. Other people find work, other people get hired. I'm never who they are looking for, I'm the only consistent piece in this puzzle: we don't want you.

I wonder if a woman can even understand what its like, for a man. It eats away at your soul, like a cancer inside, not having work. I cannot provide, I cannot protect, I cannot demonstrate my value. Every day out looking, every day the same answers. My family is depending on me, my daughter looks up to me like I'm king of the world at 8 years old, and my son thinks the world of me at 13 but I'm less than a man today, on the bus, on the way home.

My head down I walk from the stop to home. The porch has a few flowers on it still, hanging in pots. I remember the fight we had over those damned flowers. Could we afford them? Should we have them? I don't even remember why I was so mad at the time. Each month it seems like we have to do with a little bit less. God help me, I signed up for food stamps, like a bum. Living off the state, begging for food.

How can they think I'm a man, how can they look at me and even want to see me. Daddy failed again. Daddy can't get you those shoes, daddy can't afford to fix the car, daddy can't afford to do anything. I step in the house and it smells like spaghetti. In the cold months, I'd have seen steam condensed on the front window and know what was waiting for me. Olivia would draw a happy face on the steam and some message for me, knowing I was coming home from work. Years ago, it seems like.

I'm glad Tanya knows how to cook from scratch or we'd really be in trouble. Food keeps getting more expensive and Tanya's little paycheck barely covers rent. Our savings are almost gone, eaten away like rats are in the bank nibbling at the edges. I hoped that it would stretch longer but the interest rate is under 1%; inflation alone is dissolving our savings every day. What happens when its all gone, how will we pay for clothes and utilities and gas for the car?

I step inside, and lock the door. Finally in my castle, where I don't feel like the king any longer. Olivia is in her room doing homework and Travis is at school practicing for football. Tanya is in the kitchen and doesn't hear me come in. I step around the corner and see her, stirring the spaghetti sauce. It smells great. She looks great, I still can't figure out why she even wanted me in the first place. She turns and spots me and smiles, a little tired.

She doesn't ask me how it went any more. She knows, I guess. She knows nobody wants me. I talk to here about the kids and how her job was and all the things she's been holding inside, waiting for me to come home. All the while I watch her and wonder. Did I see a flicker of contempt in her eyes? A moment of doubt? Does she think I'm not really trying? Does she think a better man would have found a job by now?

I go back to our room and change, considering a shower. It wasn't so hot today but I'm still a little grimy from the day. I look over at the locked case holding my old pistol. I should pawn the thing, sell it on Craigslist or something, but today I'm glad its there. I look at the case a long time.

Some people see economic news as political leverage, as a tool to shift the balance of power. Some people are even cheered when they see bad news when their opponent's party is in power. I cannot. I know what its like to look and look and look for work, day after day. I know what it feels like to be rejected for months on end, what it does to your soul.

That 8.1% is just a number, its a piece of raw data, but what it represents is hell for the people looking for work. Its been over three years now, three years of unemployment this high. At this point nearly a third of Americans are without a job, not 8%. There are so many people out of the workforce that the real count is far higher than the number presently collecting unemployment and on the official count.

Unemployment for young people is higher than 12% for three months now (and, if you count those who haven't been able to find a job or gave up, its nearly 20%). That's not just a statistic, its lives without independence, without a future. Every month that goes by, more people enter the workforce without the ability to begin their careers, without the ability to gain experience, to produce, provide, and have a hope of building their lives.

I don't care who gets the political credit for turning this around. I don't care what economic theory is credited or what happens to academics and politicians. I want this to stop, because it is a horrible burden on the backs of everyone looking for work. Men who cannot provide for their families, women who cannot feed their children, children who cannot get educated, it is a terrible, terrible thing for families and single people alike. Small wonder suicide among men is on the rise. Small wonder families break up, marriages shatter. The number one cause of arguments in a marriage is money, we're told.

I understand wanting to fix all the other things in the world. I get that some women think contraception through insurance is a terribly important thing. But lets get to work first, okay? Lets get this country working again, then we can take a look at these other issues. Deal?
Posted by Christopher R Taylor at 9:52 AM