"So the news is upbeat, and there are no connections being made." 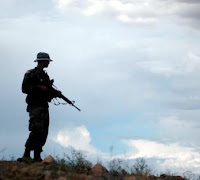 I've been one of very few voices left calling for the US to stay the course and finish the rebuilding in Afghanistan. The primary reason has nothing to do with the Afghani people, who I'm told are wonderful folks and at least some want freedom and to have the Taliban out of their nation, but it has to do with our soldiers.
I was quite young when the Vietnam war took place, but I've studied it very extensively and the fact is, we betrayed our soldiers there and left them to die for nothing because it became too uncomfortable and took too long and was too haarrrd to keep them in place fighting.
And they got into that situation after an initial series of stunning successes by rules of engagement that steadily handcuffed them into incompetence.  The US army never lost a battle in Vietnam.  Every single fight they utterly obliterated their enemies.  Even when outnumbered, the US won.  The Tet Offensive was a huge push that ended in horrendous slaughter, a massive setback for the North Vietnamese forces.
But troops were told they couldn't pursue enemies into certain areas because they were plantations for rich and powerful agricultural concerns.  They couldn't hold any areas they took, because that would make the US an occupying force, so they left and hoped the ARVN forces would take over, which they rarely even attempted and never succeeded at.
In Time, it was a massive failure, not because of military might and will, but because of political backstabbing and leftist treason against the United States for communist allies in Southeast Asia.  Knowing they could never, ever beat the US military, the North Vietnamese instead worked in the US with newspapers, college campuses, and activists.  After a while the rot destroyed the ability to fight, the will of the people to continue, and the political power to sustain the battle.
And our boys came home in defeat, unsure why they even went over there, spat on and showered with hatred by the public, and treated as borderline psychopathic pariahs for a decade.  It was a contemptible, ghastly time that fills me with frustration and anger every time I think about it.
And the same thing is happening with Afghanistan.  The "good war" that the left pretended to support, Afghanistan was about destroying the forces that harbored and assisted the terrorists that struck on 9/11.  It was about obliterating the Taliban, a horrific government of radical Muslims considered uniformly evil until 2003.  Then the left started to back away, became quiet about the horrors the Taliban had committed, the oppression of women, minorities, and homosexuals, and started to use Afghanistan as a lever against President Bush.  They weren't so much for the fight in Afghanistan as against Iraq, and they'd use Afghanistan as the weapon: you're taking focus away from the good war, we should be focused on Afghanistan!
At that time, of course, things were going pretty well in Afghanistan.  Schools and hospitals were being opened, businesses were thriving, Western journalists visited the country and marveled at the turnaround.  And it all fell apart, mostly because the treacherous left in the west emboldened and reinvigorated a demoralized, terrified radical Muslim world.  I've written about this in the past, so I won't get into it in detail again, but the same thing happened as did in Vietnam: the left in America and elsewhere undercut the military and more soldiers and Afghanis started to suffer and die as a result.
So I argued we had to stay and finish the job, or our soldiers will be coming home in defeat, confusion, and pain, having left behind friends and family -- for what?  Over a decade of misery and failure, ending in us tucking tail and running away, abandoning people we promised we'd help, surrendering to an enemy that knows all they have to do is hold out until the American people give up.  As I wrote last year:


With the right support, tools, and time, Afghanistan can be rebuilt and sustained the same way Iraq has been. There will be troubles there - its inevitable in that part of the world - but the battle can be won to stop the terrorists, if we let them do their job and give them what they need.

All the same arguments used for staying in Iraq until its done apply in Afghanistan, and abandoning it now simply proves America doesn't have the stomach to finish a job if it gets too tough. And that's just too demonstrative of the modern American who'd have given up ten miles into the Oregon Trail.

The problem is... its too late now.  We gave it our best shot, but with 4 years of Obama in office, who never wanted to continue the fight to begin with and undermined it continually, its all fallen apart.  Yes, with the right tactics and enough troops, Afghanistan could have been saved.  Yes, without the treason of the left to inspire and give heart to our enemies, we could have done it.
But we didn't get that.  We got rules of engagement that made matters steadily worse, and we got soldiers in fire camps to go out in patrols which has proven time and time again to be utterly worthless against an insurgency style of opponent.  Its gotten so bad that formerly trustworthy and powerful allies in Afghanistan have been so infiltrated with the enemy that they kill their allied American troops while out on patrol.
The "Afghani Surge" which was a fraction of the absolute minimum of what the generals knew they needed to do the job, is over, its been pulled out.  And its been an utter, predictable failure, and as Walter Russel Mead points out, the failure has been hidden away from the American people:

We should all be very glad that we have a Democratic president right now; otherwise the news would be terrible. We would be seeing a rash of horrible and depressing stories in the newspapers about strategic failure, with unremitting second guessing and belittling of a  president who agonized for months before the surge and then saw his plan fail. We’d be hearing non-stop reports in the media about the incompetent and klutzy leader who torpedoed his own policy by announcing a withdrawal date; the man who tried to please everybody and do everything—and failed at all he tried.

The press would be jumping on this narrative. There would be continuous coverage of the disarray in Afghanistan: the soldier’s we’re training are shooting us, the corruption is intensifying, and the opium trade spreading. There would be story after story about how Afghanistan seems little changed after the surge, and how peace is still not at hand. These stories wouldn’t be on the back pages; they’d be perceived as major news with profound implications for America’s global position and the Sunday shows and nightly TV news round ups would be full of talking heads endlessly analyzing each wrinkle of the failure.

There would be bitter, wounding comparisons between the president and LBJ in Vietnam. If we had a conservative Republican president right now, we’d be hearing him compared to the noble Duke of York, who marched 10,000 men to the top of the hill only to march them down again.

And we’d be hearing all kinds of damning stories about the failure of the U.S. government to deal with the chaos in Pakistan.

We’d also be reading stories linking the apparent U.S. failure in Afghanistan to the empowerment of anti-American movements throughout the Middle East. The recent riots would be used as a stick to beat the president with—his weakness, indecision and strategic inconsequentialism in Afghanistan would be endangering our interests all over the region. Instead of concentrating on the real terror threat, the press would tell us, this hypothetical clueless Republican president wasted time, treasure and attention on a failed strategy in Afghanistan. The press would try to hang the corpse of the U.S. ambassador in Libya around the neck of a Republican president, if we had one right now.

So, lesson learned, world.  That's how you want it, that's how you get it.  From now on, American shouldn't try to rebuild anything.  If you make the American people so enraged they start a war, you rebuild yourself from the rubble.  Next time, we come in force, obliterate the enemy forces, bomb the area until the rubble bounces, then say "we'll be back, and next time we'll be really mad." We have nukes, we just don't like to use them, but if you keep poking the dragon eventually you're going to make it mad enough to breathe fire.
You can rebuild yourselves.  You can create your own government out of the chaos.  Its not our problem.  We dealt with you and you brought it on your own heads.  If you don't like that don't start anything.
God forgive us for what we've done to our soldiers.  God forgive us for lying about supporting the troops and being behind them.  God forgive America for betraying another generation of men fighting for our liberty and to protect us from the evil that lurks at the edges of every civilization.
Great job, leftists. You win. I'm sure you feel proud.
And for the troops, you have my undying gratitude, honor, and thanks. What you did wasn't meaningless, because you showed our enemies we'll destroy them for hurting America. You showed them how fierce and deadly America can be even with your arms tied behind your back. You showed the dedication and resolve I sometimes fear is gone in the modern west, and when you come home you'll be leaders and the hope of our future with personal character forged in the crucible of combat.
Posted by Christopher R Taylor at 11:29 AM

I agree with your analysis about Vietnam. That was a war we should have won and the failure to do so resulted in massive suffering and death throughout southeast Asia as various communist factions exacted a terrible toll trying to create their utopias. It was a political and not a military failure. We sold the Vietnamese out with a bad treaty that we didn't honor.

Afghanistan is also a political and not a military failure. I have become deeply skeptical of achieving anything of lasting value there with Karzai in charge and a power structure dominated by Pashtun. We may have been better off had the Northern Alliance played a bigger role. We may have been better off not trying to make Afghanistan a more orderly society. An untidy, fractious mess might be a more stable and peaceful alternative. Until we figure out the politics, our troops will perform heroically, but achieve nothing.

If you have not seen the film "Osama", I highly recommend it. It is set in Afghanistan. It illustrates why it would be good to succeed, but also why it may be very difficult.