Master of things. Master of light.
Songs cast alight on you. 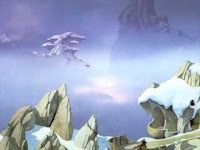 Yes is one of the progressive rock bands that showed up in the late 60s and early 70s. Along with groups such as Moody Blues, Alan Parsons Project, Pink Floyd, King Crimson, and Emerson, Lake, & Palmer, these musical groups took rock somewhere completely different than anyone had ever considered before.

What Progressive 'Rock' bands produce has as much to do with Rock&Roll as Beethoven's 9th symphony does with Bluegrass, but the title has stuck. It transcends rock and moves much closer to classical music - much of it literally classical music, as ELP did versions of songs such as Mussorgsky's "Pictures at an Exhibition" and "Fanfare for the Common Man" by Aaron Copeland, among many others.

The pinnacle of Yes' work, in my and many others' opinion is "Awaken." From the album Going For The One, "Awaken" took all the elements that Yes was known for - soaring vocals, incredible keyboard work, dazzling guitars, complex, shifting rhythms, cryptic lyrics, and incredibly well crafted music - and took them to their absolute finest peak. Playing an actual pipe organ, Rick Wakeman's keyboards have never been more profound. Steve Howe's stunning guitar work is the work of an absolute master, but the real genius is that you don't really notice how fancy he's being because it fits so perfectly with the rest of the music.

Like most of Yes lyrics, the words are less a story or a series of statements than a collection of cries from the soul or tones to match the music. Jon Anderson wrote lyrics so that they sung with the music like an instrument rather than trying to sing a song, but they do actually have meaning and coherence. Jon Anderson had read a book called The Singer by Calvin Miller, probably given him by Rick Wakeman. This book is an allegorical tale of Christ on earth, part of three books (The Song and The Finale being the last two), and it affected Anderson so profoundly he wanted to write about it.

"Awaken" is the result. Its one of those songs that comes on and you listen then finally put down everything you're doing, turn it up, and just sit back and let it crash over you up to the final, glittering notes. The crescendo of thundering pipe organ chords builds and builds to a glorious peak, carrying you along to somewhere more glorious than you have been that day, and sets you down gently with wonder in your eyes, if you are like me.

The first time I really listened to this song, I was in one of my brothers' cars, in high school. The song came up on the tape and we stopped talking. He turned it up to the point it almost hurt and we just listened. The song wasn't over when we got home, but we all just sat in the car and heard the whole thing through. I got out of the car, trying not to let them see I was crying, and staggered into the house like a newborn deer. It was awesome, in the real meaning of the words. Please do give this a careful, worthy listen; it is, as Jon Anderson called it, a 'masterwork.' Listen, and Awaken.


High vibration go on
To the sun, oh let my heart dreaming
Past a mortal as me.
Where can I be?

Wish the sun to stand still.
Reaching out to touch our own being
Past a mortal as we
Here we can be
We can be here,
Be here now.
Here we can be.

Workings of man
Set to ply out historical life.
Reregaining the flower of the fruit of his tree.
All awakening, all restoring you.

Workings of man, crying out from the fires set aflame.
By his blindness to see that the warmth of his being
Is promised for his seeing, his reaching so clearly.

All pure chance.
Hark through dark ties. As exists cross divided.
That tunnel us out of sane existence. In all encircling mode.
In challenge as direct. Oh closely guided plan.
As eyes see young stars assemble. awaken in our heart.

Master of soul. master of time.
Set to touch. setting sail.
All impenetrable youth. over all of our lands.
Ask away. and as we look.
That thought be contact. forever closer.
With all that's clear. shall we now bid.
Be honest with yourself. farewell, farewell.
There's no doubt, no doubt.

High vibration go on
To the sun, oh let my heart dreaming
Past a mortal as me.
Where can I be?

Wish the sun to stand still.
Reaching out to touch our own being
Past a mortal as we
Here we can be
We can be here.

Like the time I ran away
And turned around
And you were standing close to me.

Like the time I ran away
And turned around
And you were standing close to me.

*This is part of the Songs I Like series
Posted by Christopher R Taylor at 8:26 AM

One of my favourites too. It is on "Going For The One" though.

Whoops, thanks I'll fix that. Serves me right for going from memory instead of checking.