"Dating a guy without a smartphone is the same as dating a much younger guy." 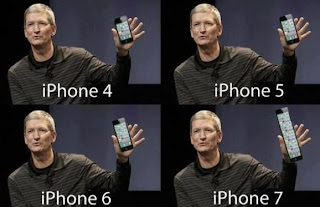 I don't have an I-Phone.  I don't have a smart phone of any sort.  I don't even have a cell phone.  Not only is that more expensive than I can afford, but I have no need for a cell phone.  When I leave the house, I like leaving the phone behind.  I don't particularly like talking on the phone to begin with, and its nice to get away where I cannot be reached.
In some ways that makes me a bit behind the times.  I've never played "Angry Birds" and I can't check my twitter account while I'm visiting the library.  I don't want to and I don't need to.  But that makes me a less attractive man, according to a column at Yourtango:

How would you  date the [phone-less] guy knowing that he could never quickly look up Yelp reviews  of the restaurant you're about to eat at or never check that email you  sent him at the last second saying you're going to be 45 minutes late? ...I already have to keep my parents in the loop about new technologies;  I don't want to have to tell my boyfriend about them too.


I feel like the guy who doesn't own a smartphone in 2012 is going to be kind of behind the times in other ways, so that's why I would never date one.

Note, these women presume the guy has some sort of Cell phone, just not the right kind.  he has an old one, can you believe it?  That phone has to be at least 5 years old!  OMG!  I'd be an inconceivable fossil to someone like that.  Then again, they would be more than half my age, so who cares.
What's significant to me is that even the girls who say they'd actually date some clod who doesn't have a smart phone are upset because the guy who has one often spends too much time on their phone, and as long as he has one, it doesn't need to be fancy.
The presumption is again that he'll have a cell phone, its like having clothes on.  This isn't like having a car; actually in New York City it isn't completely unusual to not have a car.  Its not like lacking a watch, many people don't actually wear one these days unless its some hipster fashion accessory.  Look at my steampunk leather and brass hand-made pocketwatch!  Its like nothing ever even considered in the Victorian era!  Its all ironic and stuff!
These women figure a guy is a loser for not being able to check reviews or find directions for him self on his phone.  In the past, a guy was assumed to be a loser for not looking in advance and having a plan.  They think a guy is a loser for not having a phone so they can call him at any time; in the past connections were special, not presumed and routine.  You looked forward to when you would be together in some way, not assume it would be at the touch of a button.
And the dependence on these devices is bizarre.  I depend on the internet for my publishing and research, but I know how to do both anyway if all the electricity on the world shut off permanently.  These people sound like they'd be helpless, bumping into walls and crying hysterically.  How will I ever find my way to that boutique??.
The truth is, not using a phone means you're more capable, not less, if you can pull off the same results.  A man who knows his city and has contacts knows where the food is good and isn't, knows how to get from point A to point B, and that kind of man is significantly more capable and grown up than one who has to use a phone because he hasn't a clue.
I don't think this is a factor anywhere but in big cities, there are a lot of places even in small towns where the coverage isn't great and you don't need to pull up your smartphone to figure out how to get to the Coast to Coast Hardware store.
But look at the deciding factor for these women.  They don't want a guy who is smart, strong, good, loyal, trustworthy, virtuous, and true.  They want a guy who is up on tech, who knows the hot places to go, and is always connected so they can get him whenever they want.  They think a guy is less mature for not having a gadget.
And honestly that says oceans more about them than it does any guy, smart phone or not.  I wouldn't want to date them in any circumstances.
Posted by Christopher R Taylor at 10:18 AM

ed in texas
Right after 9-11 the notion of a national ID card was brought up again; It would of course be un constitutional, an infringement, they'd be burning them everywhere in protest.
Now with smartphones, all the 'connected' people are paying to carry a tracking device around. It's even been used as evidence in a criminal trial that a suspect turned off his phone during an important time window.

Ok, are women getting shallower by the minute? I mean, if a guy doesn’t own a smart phone, it doesn’t mean he is not worth your time! It simply means he hates all that ruckus and prefer a simpler way of  how things go about! I would personally think that men with smart phones as busy ones who would eventually lose the time to be with me.