"A great day comrades, we sail into history!" 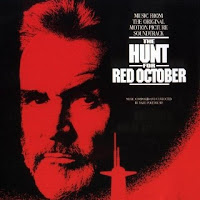 When Hunt for the Red October came out, it was a phenomenon. Not only was the story fascinating and fun, but the casting was great (odd how Sean Connery filled in for just about any ethnic type, no matter how outrageously wrong his accent was), and the visuals were very well done. This first Jack Ryan story by Tom Clancy started a franchise and the future looked bright.

Then Alec Baldwin announced he wouldn't be in any future movies as Ryan, which was disappointing. Baldwin is always entertaining and interesting to watch, and he did a great job in Red October. He said he didn't want to be typecast but I suspect it had more to do with his radical left politics - the movie was too rah rah American and patriotic, with a conservative hero he didn't want to play.

So the role went to Harrison Ford, and he did well enough in Patriot Games and Clear and Present Danger he was all wrong for Jack Ryan. Too old, too gruff, and not cerebral enough. Ryan was a CIA analyst caught up in adventures, not an action hero. He fought with his mind and got entangled in physical activities he was barely up to.

Then came Sum of All Fears which is my favorite of the Jack Ryan books. But they cast Ben Affleck, who I really don't like, and tortured the story to the point it was barely recognizable and made white supremacists the bad guys which is a complete violation of the plot. It didn't do so well.

Which is too bad, because the books are all cinematic and interesting, all of them would make good movies. Sure, the last two got a little too technical and specific in policy and the sausage making of being president but they were still pretty good.

So now a reboot is being done. The film is called Jack Ryan and it is starring Chris Pine as the main character. This is pretty good casting, because Pine does have a more Ryan-like appearance than especially Ford, but I'm concerned he's a bit too snarky to pull it off. Kenneth Branagh is directing (?!) but the plot is odd. Its a prequel of sorts to the series of movies and its been updated to modern times:

Jack Ryan segues from the Marine Corps to a position as a financial consultant for a Russian billionaire, where he's framed in a terrorist plot and forced to go on the run.

Tom Clancy is only given writing credit for having created the characters, not the story or plot, screenplay, or even idea. My guess is he sold his rights to Hollywood to get the movies made and its basically out of his hands. Where they go from there depends on how well Jack Ryan does, but already in planning stages is Without Remorse, which is a book.

However, Without Remorse is about how Clark, the deadly CIA operative Ryan intersects with in a few of the books came to be a spook and assassin. Ryan isn't even in Without Remorse and it happens when he would have just been a child. My guess is he'll end up tied into the main story and help Clark out or something.

The problem with rebooting and putting these stories in the modern era is that several of the Jack Ryan books (including the latest Red Rabbit) involve Soviet Russia, and the stories are inextricable from that setting. Books like Cardinal of the Kremlin cannot be moved to another setting without severe rewriting and violation of the story.

A better approach would be to have treated the settings and time as period pieces. Reboot the series, but follow the chronological order (helpfully provided at Wikipedia) and put them in context, in their proper time period. Historical period pieces do fine, and they have a special sort of feel to them that nothing can duplicate today. Having Clark be in the Vietnam War and fight his war against 70s drug dealers would have a great French Connection feel to Without Remorse and it would seem less like a political statement than a rip roaring adventure book.

Come to think of it that's what I'd have done with the James Bond reboot: put them in period, set in the late 50s early 60s like the books, and keep the tech to the proper levels within the books and time. Nostalgia is big, and that way you're not stepping on any toes like the way the remake of Red Dawn did, changing the bad guys from China to North Korea so as to not hurt overseas sales.

But what do I know, I thought Last Action Hero was brilliant.
Posted by Christopher R Taylor at 10:48 AM