"The American people are tired of liars and people who pretend to be something they're not."
-Hillary Clinton 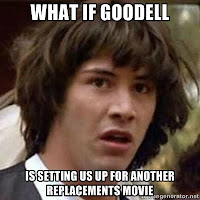 Big national elections are tough on me as a blogger.  There are topics I might write about, but there's so much saturation that people probably don't care to read it.  One more post on the presidential election seems redundant; what could I say that 900 other people haven't already?
I try to deliberately find non-political topics to write on during a heavy election cycle of this kind, especially this close to November, just to have something different out there.  Like me, I suspect most readers are pretty weary of the political junk by now, and want something else to think about.  But as I tend to get my content by looking around the internet at other blogs, news sites, and information sources, the main topic of the day is the presidential election in America.
Its not that nothing else is going on, its that I find it challenging to find other things going on.  I have a few oddball sources I check, but sometimes it can be tough.  I have little bit ideas like how I think The Replacements is the best football movie ever made, and how its nice to have a cat in the house again, but nothing adding up to a real post.
So content has been a little light for a while, and hopefully I can build up more to read again in the future.  For now I'll just post what I can, and wish everyone out there the best.
Incidentally, Mists of Pandaria is out, and its better than people anticipated.  The panda thing never bothered me, I mean you can play a cow already in the game, and there's an element of childish silliness in all fantasy (elves?  Magic?  are you serious?) so adding Kung Fu Pandas isn't really that outrageous.  The Pokemon-style pet battles are pretty fun, although they are kind of slow.  And the new lands are very, very pretty.
City of Heroes is struggling to stay open, but I confess without a future to work toward, my interest in the characters there has significantly waned.  I was working to get my main character built up to max level but its so slow and painful I just can't generate the interest to keep grinding.
I read another Harry Dresden novel, and it was pretty good but seemed... lacking, somehow.  The name is Ghost Story and it felt kind of like filler, like it was setting up something later rather than a full story in its self.  Sometimes I get the impression that Jim Butcher is making it up as he goes along rather than having a real plot laid out before he starts writing.  That can work well but sometimes it is sort of obvious.
And finally, I have reached the age where teenage girls look like cute kids to me instead of hotties.  Yeah, they can be hot, but my first reaction is "silly girl" rather than "potential date."  Took me long enough. Although in days long passed, the old, rich, powerful guys tended to get the young pretty girls because they represented safety and power while the younger guys were trying to make their way, so maybe it isn't so odd.
Posted by Christopher R Taylor at 8:43 AM