"Go crawl back in your holes. SCOTT VAN DUZER IS MY HERO!" 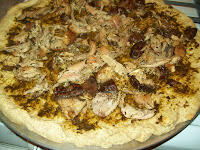 The image of a man hugging President Obama has been the topic of some small controversy - obviously the picture was staged, a man who grabs the president like that gets shot and not by a camera unless it was cleared with the secret service ahead of time. The Florida pizza shop owner claims he's the victim of a boycott now for the picture and says he's losing business. Well, perhaps, although there's no sign of any organized boycott. Just people who'd rather not patronize someone that foolishly political in support of an unpopular president.

My mother grew up in Cheyenne Wyoming and never had eaten chili or tacos before she married my dad. Even as late as the 70s a lot of towns had no ethnic foods in many places in America. I remember well my college friends in Grand Rapids Michigan confused by the idea of putting pineapple and ham/canadian bacon on a pizza (these days its everywhere, although New York guys say those are fighting words). Getting a calzone was a rarity in Oregon until the 80s.

Now, the food choices are everywhere, and its wonderful for someone like me. I love food, I love to try new food. I love to sample different cuisines and flavors and styles. Sometimes it doesn't work - I have yet to eat any Indian food I like - but most of the time its wonderful. I had some Shawarma not long ago for the first time, and it was great (its basically gyros). It used to be you had to live in a major port city to get these options, you had to be in an area with a heavy national population like Chinatown or little Italy to get these kinds of food. Now they're all over the country.

There are still divides out there. You can't get a good soft pretzel east of the Mississippi river. You can't get really good coffee outside the Northwest except in very small shops in big cities. Its difficult to find very niche ethnic food like Ethiopian or Argentinian most places. But great pizza in Florida? Sure, I can believe that. After all, 99% of a pizza's quality is crust and sauce. If you get those right, the toppings are pretty much universal and it will be tasty.

Just be aware that when a shop says its selling pizza, it might not be. I likechicken garlic pizza with white sauce - can't eat it these days, but I like it - but is it really pizza? The idea of Greek pizza with feta, gyros meat, and olives sounds tasty, but is that pizza? And those California concoctions where some guy claiming to be a chef puts honeybees and eggplant on a crust and claims its pizza, I'm not buying.

Just don't call a man a hero for hugging the president. That's just silly.
Posted by Christopher R Taylor at 8:36 AM