MUSICAL CHAIRS WITH OUR FUTURE

"no matter what happens, we're doomed." 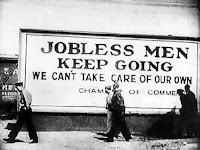 A couple of days back I posted a link and some analysis of a book about the Obama administration, about what is going on behind the scenes with the federal reserve and the debt.  You know that video of Romney talking to the crowd, saying basically "My message of smaller government and less taxes won't resonate with people who pay no income taxes and live on the government's welfare?"  Well there's a section blank which wasn't being released and in that section Romney explains a bit more closely what I was writing about:

[The] former head of Goldman Sachs, John Whitehead, was also the former head of the New York Federal Reserve. And I met with him, and he said as soon as the Fed stops buying all the debt that we're issuing—which they've been doing, the Fed's buying like three-quarters of the debt that America issues. He said, once that's over, he said we're going to have a failed Treasury auction, interest rates are going to have to go up. We're living in this borrowed fantasy world, where the government keeps on borrowing money.
You know, we borrow this extra trillion a year, we wonder who's loaning us the trillion? The Chinese aren't loaning us anymore. The Russians aren't loaning it to us anymore. So who's giving us the trillion? And the answer is we're just making it up. The Federal Reserve is just taking it and saying, "Here, we're giving it." It's just made up money, and this does not augur well for our economic future. You know, some of these things are complex enough it's not easy for people to understand, but your point of saying, bankruptcy usually concentrates the mind.

Let me repeat what he said here.  The Chinese aren't loaning America a trillion more dollars a year.  Nobody is.  Is that sinking in?  We aren't actually borrowing money from anyone to feed this debt.  The US Treasury Department is spending more money than the United States has in assets - we're more in debt than the Gross Domestic Product is producing each year.  So what's the answer?The Federal Reserve simply announces that we have more money.  Its not printed, its not minted, it isn't based on anything.  Its just a declaration: we have more money now, this is how we'll pay for the government: just declaring we have it.  So we're in debt to... ourselves?  Not exactly.  We're effectively just printing cash.  As in: we're creating money that doesn't exist, which  makes every single dollar in your wallet and bank account worth less.
And the only way to maintain that is to leave the interest rates low and keep doing it as the debt piles up more than a trillion dollars a year because if you raise the interest rates, the debt piles up even faster.  But with the interest rates this low, investment means nothing and people are seeing their savings and low end investments like CDs chewed away by inflation.
And if we keep doing this?  The debt keeps piling up and demolishing the value of the dollar, while making America more and more unstable as an economy.  That's why credit rating companies keep downgrading the USA, because of this exact effect.
But if we stop, nobody will buy this debt.  Not only is no one rich enough to buy it, but nobody wants to invest in America, because its a crappy investment.  And eventually, when someone responsible stops playing these games, interest rates will have to go up, but so will inflation as reality catches up with tricks being played between the Fed and the Treasury.  And the Democrats in Washington want to spend even more.
Now If I were Mitt Romney, I wouldn't want to be president with this setup.  Because its going to come crashing down, horribly, and soon.  As soon as that happens, what we've been going through economically will look like an economic boom.  We're already in a situation where there are so many unemployed - and even never yet employed - that it will take years to get the ball rolling again.
Let me pause here and illustrate.  I was in high school when Ronald Reagan first was elected.  The unemployment rate was almost 20% in Oregon, and I was trying to find a job.  I couldn't, anywhere, no matter what I did.  They just weren't hiring, and especially not some untrained kid.  When Ronald Reagan took office in 1980 Carter had so ruined the economy that it was worse than now.  When Ronald Reagan ran for reelection in 1984, the unemployment rate had dropped to around 6%, nationwide (about 14% in Oregon), and growth was roaring along.  It took til around 1982's fourth quarter before the turnaround began under Reagan.  In 1983 it was obvious things were getting better but it was still really hard to get a job.
You can't just suddenly sprout jobs, it takes time to create new companies, build capital, expand your business, and start hiring.  People have to be trained, you don't often want to pour fifty totally new people into your business all at once.  So it takes months to start building it up.  And with millions of jobs lost, it takes time to replace those.  So in 1984, the unemployment level was still pretty bad.  Yes, things were immensely better, but it took time to get that unemployment down to a comfortable level that held until 2007, with some bumps in the early 90s and early 2000s.
So if the economy starts to turn around now, it will take years before you really see those jobs back.  Yes, we can see growth and hiring ramp up pretty rapidly with the right president and policies getting the spiked iron boot of government off their necks.  But that 8% unemployment rate isn't going down very rapidly no matter what.  And unlike the Carter recession, so many jobs have been lost this time around, so many core businesses destroyed, so many sectors of the economy gutted it will take even longer.
Now, pile on top of that really high interest rates (making investment and expansion more expensive) and stack a big fat layer of inflation on top, making the dollar worth even less.  Do you want to be in charge when that happens?  I wouldn't.  Because no matter what you did, everyone would talk about the bad, and how it got worse, even if you were doing all the right stuff.  Because when the music stops, the president in charge will be the guy without the chair.
Its going to get a lot worse before it gets better; and if the federal government does the only thing it possibly can do to get things better, its going to be pretty rough on a lot of people because that means firing a ton of federal workers, cutting back on all sorts of programs, and states being cut free to fend for themselves.  No more bailouts, no more loan guarantees, no more "trouble assets relief."
I'd say buy gold but who can afford it these days?
Posted by Christopher R Taylor at 8:29 AM