GULLIBILITY IN THE PRESS

Snark and mockery are what the immature and mean of intellect, the uneducated and the crass offer in the place of satire and wit. 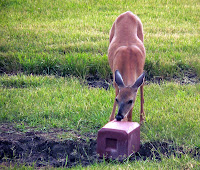 Two events in the news recently made me wonder something about the left and the internet.  The first is the report that a 5,000 arena that wasn't full somehow held 18,000 Obama fans when the president visited Wisconsin recently.  No one has been able to find those missing 13,000 people, and the story seems to be traced back to Democrat mayor Tom Barrett of Milwaukee.  Well, less than 5k doesn't sound very promising or hopeful for the president in a long time Democrat city, so maybe he thought that would help with the president's image.
The other story is Roger Simon at Politico who attempted a humorous article poking fun at Mitt Romney by claiming Paul Ryan has been forever tainted by the "stench" of Romney in the campaign and then went off on this riff:

Coming from a resident of Iowa, a state where people are polite even to soybeans, this was a powerful condemnation of the Republican nominee.
Though Ryan had already decided to distance himself from the floundering Romney campaign, he now feels totally uninhibited. Reportedly, he has been marching around his campaign bus, saying things like, “If Stench calls, take a message” and “Tell Stench I’m having finger sandwiches with Peggy Noonan and will text him later.”

It was meant to be satire, but it didn't really work.  People took it seriously, so much so that Paul Krugman a the New York Times, Tommy Christopher at Mediaite, Lawrence O'Donnell at MSNBC, Joe Gandelman at Moderate Voice, leftist radio personality Taylor Marsh, Daily Kos, Comedy Central, and on and on all ran with it as if it was real news.  As Ace writes at his HQ:

Yet the geniuses that would run our lives for us failed to pick up on even that, and rather than take the one minute to contact Simon (or Ryan) to find out if any of this was even remotely true, they just ran with it on television and internet "news" operations.
Is this a conspiracy, then?
Of course not. Never ascribe to conspiracy what can be easily explained by a combination of stupidity, incompetence, malice, and more stupidity, and also a lack of any sense of humor whatsoever, further compounded by a Dunning-Kruger-esque belief that one does in fact have a functioning sense of humor.

What strikes me in this, and several previous stories in recent memory of the press willing to believe nonsense and rumor as fact because they read it online, is this seems to betray a pattern and understanding of life.
What I mean is this: we on the right are very used to having to weigh everything we read, particularly from the legacy media, with a sizable block of salt. We know that what we're gold often is mistaken, misleading, misquoted, parsed out in small pieces, and incomplete.  It doesn't even matter what the topic is, generally speaking you're not getting the whole story from the press.  They are often lazy, incompetent, and credulous even when there's no deliberate or unintentional bias.
We have developed a natural suspicion and doubt when we see a report on anything.  Part of it is just seeing over and over again how the press slants stories, part of it is learning as we grow up that a lot of what we've been told is utter nonsense or greatly misleading (thus the Common Knowledge series I do), and that even at their best, the press are trying to sell a product more than they are trying to report facts.
The left seems less inclined or trained to respond this way.  It seems like they're much more willing to trust and believe what they're told by the press.  That they aren't as skilled or inclined to parse, study, question, and backcheck what they hear or read.  Sure, they'll instantly discount and even ignore something a conservative says, presuming evil and malice in it, even if its something they'd usually agree with.
But when the legacy media or a trusted source says something, they tend to just nod and go along.  And its getting them in trouble lately, particularly on the internet where its so easy and fast to check that people pile on with glee and mockery when they get it wrong.
It really would serve these guys better to be more skeptical of what they read and hear, but to do that, they'd have to develop a distrust of these sources, recognize their slant and lack of professionalism, to question, check, and doubt.  And that's not as easy and comfortable as just agreeing.
Don't get me wrong, the right does it too, quite often - Rush Limbaugh said it, it must be true!  I read it on Michelle Malkin!  They wouldn't lie, be sloppy, or get taken in!
Its just that we on the right have had to learn to be more skeptical, and its something the left really needs to learn to avoid this kind of humiliation.
Posted by Christopher R Taylor at 12:12 PM

The more things change, the more they stay the same.