FOUR MORE YEARS FOR WHAT?

" Is a massive increase in government dependency the solution to poverty?"
-Jennifer Rubin 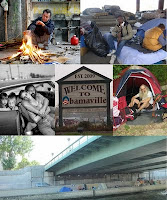 President Obama says he should get four more years to complete his work, that he's now got a grade of "incomplete" because the work isn't finished yet. He promises "sustained, real" recovery if he's just given another chance. Perhaps he's hoping that the women targeted with the "war on women" tack will give the boyfriend one more chance.

The problem is that appeal to be taken back is usually combined with a statement of how they've changed. They aren't the same man, baby. They'll pay better attention and stop gambling/drinking/beating you/sleeping around/whatever. Obama isn't offering that. He's promising more of the same.

And that's a problem, because so far the same isn't working. What will President Obama do to bring about this recovery? His economic theory for the first four years was to pour money into "green" economy, spend a trillion dollars on a "stimulus" package and wait for things to get better. When he used the word infrastructure, that's what he meant: a new "green" economy based on solar energy and other "renewable resource" companies. He genuinely thought that they were held back only by an insufficient amount of government funding and would explode into a whole new powerful sector that would rebuild America's economy.

It didn't. It just threw money away on companies like Solyndra that collapsed anyway. So what's his plan now? What will be done to help the economy, to create jobs, to get growth going? How will he deal with inflation, gas prices, and rising food costs? So far the economic record is horrid, and Investor's Business Daily counts a few of the ways:
As food prices spike, driven by drought in the midwest and gas prices moving to the $5 a gallon mark in America, the dollar spends less every week. Last June, more people went on food stamps than found a job -- three times as many. Unemployment has been creeping up again, and the next report is expected to be another gain. What jobs people are finding tend to be low wage jobs.

What is the solution, what answers does President Obama offer? What do the Democrats suggest is the key to reversing this and giving up "real, sustained" recovery? More of the same. More food stamps money. More spending on poverty. More "stimulus," more taxes - except from the Hollywood elite - and 4 more years of what we've already seen.

How, exactly, is that going to turn things around? What about this prescription is going to help? As if they know this isn't any answer, the Democratic National Convention has been focusing on 'social justice' issues like women being paid less than men on average. Although this has been largely debunked in the past, its an issue that women who cannot find a job are less than interested in right now. Democrats act like the first thing President Romney will do upon taking his oath of office is ban abortion and require all women to be chained to a hot stove in their bare feet.

But what happened to the Democratic Party of the past? There was a time that the Democrats were focused on the little guy, the hard working American, the guy who was struggling, who was poor and needed a future. There hasn't been one mention of homelessness, poverty, or the poor whatsoever at the DNC so far. Nearly one out of six Americans are living in poverty, according to the definition and numbers from the Obama White House. How is four more years of this kind of government going to help these people?

Who does the DNC really stand for today? Who do they want to help? Because calling for more money to give people food stamps isn't going to turn anything around.
Posted by Christopher R Taylor at 10:36 AM