"Until the candidates restore joy, it’s impossible for us to be joyful"
-NBC News senior White House correspondent Chuck Todd 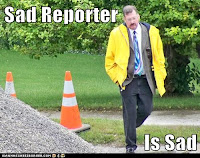 Remember the gleeful party that the 2008 campaign was for the press? They were practically throwing underwear on the stage when Senator Obama made speeches. The women were giddy like school girls, the men were fawning and amazed. The entire tone was of victory and celebration, a feeling of inevitability, for good reason.

Now consider this article by Mark Leibovich at the New York Times:

his spring, for the first time since I started writing about politics a decade ago, I found myself completely depressed by a campaign. “How am I ever going to get through it?” is not the question you want to be asking yourself as you enter what are supposed to be the pinnacle few months of your profession.
...
But what’s been completely missing this year has been, for lack of a better word, joy. Yes, it’s always kind of fun to follow Joe Biden around and wait to hear what will come out of his mouth next, and who knows what Paul Ryan has hidden under his oversize jacket. But the principals don’t seem to be experiencing much joy as they go through their market-tested paces. A kind of faux-ness permeates everything this year in a way that it hasn’t been quite so consuming in the past.

That's not a tone of confidence, victory and excitement. Its the song of someone depressed by how they see the election turning out. Then we have this piece at Politico by Dylan Byers:

Presidential campaigns are supposed to be the greatest show in American politics — infused with big ideas and historical import. Yet after 16 months enduring a Republican primary and then a two-man contest so far defined by gaffes, cynicism, knife-fights and rapid-fire news cycles, even the best political reporters want the whole thing over with.
...
“People are feeling grateful that it’s almost over,” added Maggie Haberman, who covered the 2008 election for the New York Post and is covering the 2012 election for POLITICO. “There has been this ongoing lack of enthusiasm. Neither side seems to be enjoying this race — not the Democrats or the Republicans, and not the reporters.”

If there is one narrative to anchor what often feels like a plotless 2012 campaign, it is media disillusionment. Reporters feel like both campaigns have decided to run out the clock with limited press avails, distractions, and negative attacks, rather than run confident campaigns with bold policy platforms or lofty notions of hope and change — leaving the media with little to do but grind along covering the latest shallow, sensational item of the day.

The Washington Post’s Dan Balz, The Wall Street Journal’s Peggy Noonan, and Shapiro all wrote their own versions of the “Worst Campaign Ever” story. Shapiro’s actually bore that headline, verbatim.

This is not a campaign the press is enjoying as much. Now, they try to give reasons, both Leibovich and Byers blame the fast paced 24 hour news cycle, the attempt to control the press, the focus on gaffes, the negative tone, and so on, but even Leibovich has to admit that this isn't a particularly bad campaign:

Nor am I a member of the “deeply saddened and troubled” club, like John McCain (or whoever tweets for him), who recently called this campaign the “worst I’ve ever seen.” This from someone who in 2000 had to field the race-baiting accusation that he fathered his adopted Bangladeshi daughter, out of wedlock, with a black woman.

The tone of this campaign isn't especially negative - particularly when compared to previous ones. And the focus on gaffes isn't unique, every candidate since Washington has tried to limit and control press access. News coverage has always been directed largely by what got people talking and excited. But there is a clue in the repeated complaint about the internet and 24 hour news cycle, something Walter Shapiro lets slip in the Politico article:

This is worse than normal, a lot less fun, and it feels impossible for us to change the conversation.

See, the problem they have with the way news is covered now isn't so much with the content as their inability to control that content. In the past days of glory for the news media, they could shape what people talked about by focusing on what they wanted to cover and ignoring the rest. They could just dry up a topic they didn't like by not talking about it, and push a topic by focusing on it and giving it plenty of coverage.

But with the level of competition in the news industry right now, particularly cable news, they are compelled to focus on what actual customers like. And the internet buzz, the biggest "water cooler conversation" in the world is what drives that. There was a time ABC could bury Joe Biden's 'chains' comment and focus instead on Paul Ryan's use of the word 'vow' when it was just a campaign statement at a factory. But that's not what people are talking about. Instead people did react so poorly to Biden's crack that pressure was on to dump the man from the ticket and Ryan's comment instead has led to a discussion about 'fact check' features at news sites.

When Shapiro says " it feels impossible for us to change the conversation" he's lamenting how the legacy media isn't controlling the narrative as much any more. They can't shape the campaign how they like. That's been true for a while, but in 2008 they didn't need to, everyone was fascinated with what they were fascinated by, and so the story went just how they wanted.

This time around, not so much. These are not people happy with the presidential campaign. And the real reason, whether they want to admit it or not, is that their guy isn't cruising to victory. He's struggling to keep the race close and falling behind. Their cries of "legitimate rape" "lies" and "old senile actor" aren't working. In fact, they may be working in reverse, to move people away from the Democrats. This just isn't their year, nor was 2010.
Posted by Christopher R Taylor at 8:57 AM