COURAGE, NOT DAN RATHER 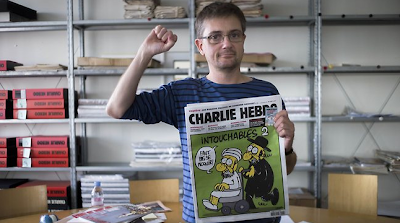 That's the little French guy who published some Muslim cartoons today in a French magazine. Some of the cartoons have Muhammad in them, the rest poke fun at Muslim activity. The publisher said:

"The freedom of the press, is that a provocation?" he said. "I’m not asking strict Muslims to read Charlie Hebdo, just like I wouldn’t go to a mosque to listen to speeches that go against everything I believe."

And the editor added:

“Muhammad isn’t sacred to me,” he said in an interview at the weekly’s offices on the northeast edge of Paris. “I don’t blame Muslims for not laughing at our drawings. I live under French law; I don’t live under Quranic law.” Charb said he had no regrets and felt no responsibility for any violence. “I’m not the one going into the streets with stones and Kalashnikovs,” he said. “We’ve had 1,000 issues and only three problems, all after front pages about radical Islam.”

Good job: that's how you deal with terror and intimidation.
Posted by Christopher R Taylor at 3:07 PM