"Grow your own as much as possible, even if it's just a few things on your patio." 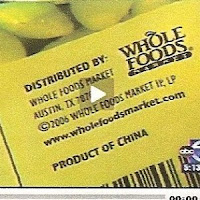 One of the more recent trends in agriculture is the push for "organic" food. This is an odd title, since all agriculture is organic; we aren't ordinarily eating apples made of synthetic carbon forged in Dow Chemicals lab. The title was chosen probably because it sounds nice and healthy rather than for any honesty in labeling.

Organic farming is a deliberate effort to avoid heavy use of chemicals such as pesticides and to stress the land less. The theory is that by using natural fertilizer, natural pest control such as ladybugs, praying mantises, and bats or swallows, the production of food would then be less damaging to the soil. Pesticides soaking into the ground get into the dirt and even local water, potentially causing a hazard to the surrounding area.

As a result, organic food farms produce a smaller, often less attractive product, but one which you can be confident was done with as much care as possible for the land it was grown on. And its proponents are certain the food is better for you as well. Because of the lack of chemicals and growth stimulants, the food carries no carcinogens and has a higher vitamin and nutritional content. Maybe that apple doesn't look as pretty but it tastes better, they say.

Is it true? Not according to recent studies. Researchers from the Veterans Affairs Palo Alto Health Care System and Stanford University examined organic vs ordinary farm foods such as eggs, milk, fruits, and vegetables to find out if the claims held up. As Kenneth Chang writes in the New York Times:

They concluded that fruits and vegetables labeled organic were, on average, no more nutritious than their conventional counterparts, which tend to be far less expensive. Nor were they any less likely to be contaminated by dangerous bacteria like E. coli.

Conventional fruits and vegetables did have more pesticide residue, but the levels were almost always under the allowed safety limits, the scientists said. The Environmental Protection Agency sets the limits at levels that it says do not harm humans.

Smith-Spangler and her colleagues found there was no difference in the amount of vitamins in plant or animal products produced organically and conventionally - and the only nutrient difference was slightly more phosphorus in the organic products.

These foods are no better for you nutritionally, and the slight trace increase in pesticides on the food are not only easily washed away (you... do wash your vegetables and fruit before eating, right?) the levels are well beneath safe amounts for human consumption. According to the studies, organic chicken and pork is 33% less likely to carry bacteria resistant to three or more antibiotics than ordinary farm meat. However, if you cook that meat, the bacteria all dies.
So while technically the claims of Organic Food having fewer chemicals and being safer is accurate, its irrelevant. Its like saying a Ford has fewer bats in it than a Chevy because they found a bat in one out of fifty thousand. Open the door and it goes away, and the level of bats in your cars is insignificant anyway.

In fact, organic food is not any better on the land than the big farms, either. While its true they have a lesser immediate impact on the area a farm is situated on, there is a bit of a misconception about fertilizer and how it works. Pouring manure on a farm does work, but it only works because it has the same chemicals as chemical fertilizer. Putting cow poo on your farm does the same basic thing as putting Monsanto's latest wonder product, but not as efficiently. You get the chemicals, its just diluted with lots of other materials. Its like using salt, or anchovies to flavor your soup. Yes, they'll both give you salt, but one is also giving you stinky fish.

And since organic farms on average produce less than half as much as an ordinary farm, that means they must take up twice as much land to match the output of an ordinary farm. And that means they are farming on a larger area, stressing the environment over a larger area. Farms are destructive to sylvan forested and wild areas; you can have wilderness or you can have a huge organic farm: take your pick.

As to the flavor? I can't tell the difference, to be honest. Go ahead and try it yourself, get an organic carrot and an ordinary one. Tell me how different they taste. Its absolutely true that a free range chicken tastes better than a cooped up one with its wings and beak clipped. And farm eggs are better than store eggs. But the truth is, organic farms aren't the same thing as a little family farm and the resulting product isn't much different in the end except it tends to be smaller and not as nicely formed.

Oh and it costs more, a lot more. You pay to get that word "organic" stamped on the label. You will pay 10% higher prices or more for the privilege of buying that organic beet, and its no more nutritious than an ordinary beet from the store. Since most stores that carry a wide supply of "organic" foods tend to be more high-end and expensive to begin with, make that number 30% or higher. And since the food tends to be smaller, you're paying even more by quantity. And in today's economy, that's tough to justify.

And since at least some food labeled "organic" is no different than the food not labeled that, you never know for sure if you're getting what you think you are - other than ripped off. And the definition of an "organic" farm can be very nebulous and uncertain from state to state, but the labeling doesn't say so.

If you want to buy organic foods to support local farms over the evil mega corporation farms... you're not. Organic food farms are often quite large and incorporated and often quite a long ways away from you. As far away as India and China, in fact. If you want to support local farmers, go find a farmer's market, the real one not the trendy big city once-a-week kind. That's your local farmer in a coop selling their actual products, and they're not only dirt cheap but good quality. And grow your own in a garden of your own if you want food. It might be a good idea to get this started now, in case you have to supply your own food some day.

Don't get me wrong, I like the idea or organic farms, and they aren't bad. Using bats to kill bugs rather than spraying is a good idea. On the whole, organic farms are often cleaner than non-organic because of their need to take more care with bacteria and other problems. There's a lot of good in these farms, but the claims of their benefits are greatly overstated.

As the population grows, we need to produce, more, not less food. So going organic means a lot of people go hungry, or die over time.

*This is part of the Common Knowledge series: Things we know that ain't so.
Posted by Christopher R Taylor at 9:58 AM