CLINTON AT THE PODIUM

"It depends on what the meaning of the word 'is' is." 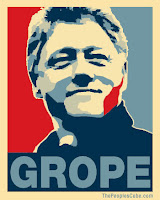 President Clinton is going to speak at the Democratic National Convention this year. Despite being a well-known adulterer, serial sexual harasser, and infamous liar, President Clinton is still liked by a lot of people. He's also well known as being one of the best speech makers of the modern era, even if his speeches never moved me because I found him to be dishonest and his speeches full of nonsense.

The Clinton speech is being greatly anticipated by many leftists and Democrats, who believe it will move America and reverse their latest ill fortunes in the polls, sweeping everyone onto the bandwagon. He's just that good, they argue.

Some on the right are afraid, because of Clinton's popularity and skill with speaking. I'm not, and here's why.

I don't think former President Clinton likes President Obama. I think he is annoyed with Obama. I think he challenges Clinton's ego by being not just popular but by doing things like reversing the core of welfare reform. While Clinton didn't like welfare reform and initially promised to reverse it when he got reelected, its become kind of a signature achievement for his administration (one, like balancing the budget, done over his objections by the GOP congress, but you have to give him credit for signing the bill). Reversing this hurts his legacy.

And while I think Bill Clinton is very loyal to the Democratic Party, I think he sees President Obama is actually damaging the party brand and further I think Bill Clinton and Mitt Romney aren't that far off on policy. Sure, there are basic differences, but I don't think Clinton views a Romney presidency as such a bad deal.

So I'm not expecting the Clinton speech to be really very helpful to Obama. I think he'll give a speech like Christie did: mostly about himself, not much in terms of supporting Obama, and I could see Clinton possibly even slipping in a few daggers into the speech, things that actually hurt Obama.

Some people think Bill Clinton is a problem for modern Republicans. I don't. I think he helps the GOP. See, every time the Obama team or Democrats, or leftists, or the legacy media (yes, there's some repetition there) trot out the old "we need to move forward, not to the failed policies of the past" there's Bill Clinton.

Or when they say something like "repealing Obamacare would result in millions going without insurance, it would result in people dying, in people getting cancer. Its heartless and evil." Point out that Obamacare didn't exist during the Clinton administration. Was it heartless and evil back then? Were people dropping by the thousand during that time? Was that an era of horror and cancerous evil?

Because people who remember those times tend to remember them fondly. We were generally at peace in America. We had a pretty booming economic time. The budget was balanced. Unemployment was pretty low. Things were going pretty well back then. So every time the Obama administration slams the past, they're slamming those days.

I'd love to see us roll back the budget to the Clinton years, in terms of absolute spending. Yes, Clinton had idiotic spending priorities and jacked up taxes until he killed the Reagan boom years, but the overall spending amount was much better than now. That predated the Department of Homeland Security, the Prescription Drug welfare program, TARP, the "stimulus," and the ACA. Going back to those years would be a great step in the right direction.

And would people argue that those were years of great evil, destruction, wailing, and gnashing of teeth? Was grandma being tossed over a cliff in her wheelchair? Were poor people force to eat dog food? Were minorities being horrifically oppressed and robbed by the rich under Clinton?

President Clinton is the left's hero. He was the last successful Democrat president and the only one in the last 50 years. He's not a problem for the Republican Party. He's a problem for Obama.

*UPDATE: Politico compiled eight digs that President Clinton has directed at President Obama in the past, including “In theory, we could find someone who is a gifted television commentator and let them run. They’d have only one year less experience in national politics.” From the Charlie Rose show in 2007. Conspicuously missing is the comment on carrying his bags.
Posted by Christopher R Taylor at 11:38 AM