BUGS IN YOUR GUT

"There are no such things as applied sciences, only applications of science."
-Louis Pasteur 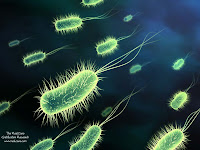 It wasn't all that terribly long ago that Louis Pasteur was put in an insane asylum, partly for claiming that the world swarms with tiny creatures that cause disease rather than imbalances in basic bodily "humors."  In time his policy of sterilization to prevent disease and the science of bacteria has become standard and the old school of surgeons who'd bleed people to save them has died out.
But there's another side to these little critters.  Bacteria were thought of only as a pathogen, a tiny danger that we had to fight against.  Scientists began to realize that they are beneficial as well, that some bacteria help us survive.
You read the articles every once in a while, trying to gross people out.  You're covered with microbes!  Tiny things swarm all over your body!  Eww!  But these itty creatures and plants are actually good for us, and shouldn't be wiped out.
The first I ever heard about this was in regard to milk, where people who lacked a certain bacteria in their gut would be unable to properly digest milk products.  Acidophilus was next, a bacteria naturally occurring in yogurt, which aids in digestion.  Its not just a matter of acid and cells in our intestine getting nutrition, we have little buddies inside us helping break down and digest food, too.
And now, scientists are finally studying more closely what those bacteria are, what they do, and most importantly how our life and diet affect them.  Jörg Blech writes in Spiegel about a project to collect bacteria samples from stone age indigenous peoples:

The search for microbes aims to shed light on the nature of mankind's original bacterial flora. These indigenous test subjects have had almost no contact with outside civilization... Microorganisms help digest food, supply the body with vitamins, train the immune system and ward off harmful pathogens.
But how do these tiny benefactors fair when their host is exposed to a Western lifestyle? To answer this question, researchers not only took swabs from the traditional people living in the rainforest, but also from people in more highly developed locations in the Amazon basin, in larger settlements, in the Peruvian provincial capital Iquitos, and in Manaus, a Brazilian city with a population of nearly 2 million.

The work is still underway, comparing the two sample groups to see if there are any differences.  Similar efforts are underway elsewhere around the world as well.  I have a personal theory about this all, of course.Have you noticed that suddenly everyone seems allergic to everything?  That lactose intolerance is so common nobody is surprised any more?  That peanut allergies are so common schools are banning peanut butter sandwiches at lunch?  That foods have gluten warnings on the packages that you never even heard of 20 years ago?
Part of the reason for this is probably modern medicine: people who had these problems in the past would get sick and die quite young, probably without the parents even understanding why.  She was always a sickly child, and she finally passed on.  Now, these people survive, have babies, and pass on the genes instead.  So its more prevelant.
But I have another theory.  Almost all food we get today has preservatives in it, chemicals designed to reduce spoilage, slow rot, enhance storage time and kill bacteria.  Now, consider a moment, isn't it at least possible that constantly eating this stuff eventually will tend to harm the natural, helpful bacteria in our systems?  That eating food tainted with chemicals designed to kill bacteria might actually, you know, kill bacteria.
There are other factors as well.  Mr Blech continues:

When a newborn slides through the birth canal, it is automatically inoculated with lactobacilli from the mother's vagina -- precisely the bacteria that the infant requires to digest the mother's milk.
But during a C-section, this natural colonization can no longer take place. The baby is colonized at random, often by airborne bacteria from surfaces within the delivery room.
The microbiota of C-section children differ from their naturally born peers even a full seven years after birth. "The disappearance of microbes that play physiological roles early in life is particularly worrisome," says Blaser. "Perhaps they are missing in certain phases of the child's development."
What's more, a study of 1,255 mother-child pairs in Massachusetts indicated an increase in body weight. Of the children who were born in a natural manner, 7.5 percent were obese at the age of three -- compared to 16 percent of the C-section children.

Now, the obesity thing could simply be a lifestyle issue - are women who get a C-Section more likely to feed their kids poorly or expect less exercise?  But the bacterial thing is pretty important, and a problem for children.  This is another very likely source of dietary problems, given how popular C-Section births have been for a while now.
And to complicate matters, scientists have found a coincidence at least between certain diseases and a lack of bacteria in the bodies of sufferers.


People affected by such microbial imbalances are often prone to allergic disorders, chronic inflammation of the small intestine, intestinal cancer, Type 2 diabetes and pathological obesity. Recent studies indicate that an impoverished flora could even be a contributing factor for Alzheimer's, Parkinson's, multiple sclerosis and autism.

In other words, lacking these critters might be causing us to lose our ability to fight off some diseases or even lead to an increase in their prevalence in the population.  And our lifestyle and diet might be causing these critical bacteria to die out in our bodies.
In other words, we're probably better off eating natural foods, unpreserved.  We're better off living a more simple, natural life, as people have been saying for about a hundred years now.  Sure, food without preservatives don't last as long and there's an increased risk of food poisoning unless you're careful, but the long term effects may be much worse.
Posted by Christopher R Taylor at 9:45 AM

"We're better off living a more simple, natural life, as people have been saying for about a hundred years now. "