"It would be indelible, incurable. It would last for generations." 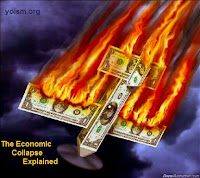 Bob Woodward has been writing for the Washington Post for a long time. His primary claim to fame is the Watergate scandal which he and Bernstein covered for the Post using some inside information from FBI agent William Felt (known only as "Deep Throat" at the time).


The cascading impact would be unknowable. The world could decide to dump U.S. Treasuries. Prices would plummet, interest rates would skyrocket. The one pillar of stability, the United States, the rock in the global economy, could collapse.

"So," the president said, "if we give $1.2 trillion now in spending cuts" - the amount in the House bill to get the first increase in the debt ceiling for about six to nine months - "what happens next time?" The Republicans would then come back next year, in the middle of the presidential campaign, and impose more conditions on the next debt ceiling increase. He could not give the Republicans that kind of leverage, that kind of weapon. It was hostage taking. It was blackmail. "This will forever change the relationship between the presidency and the Congress.

"Imagine if, when Nancy Pelosi had become speaker, she had said to George W. Bush, 'End the Iraq war, or I'm going to cause a global financial crisis.' "

So, Obama said, they had to break the Republicans on this. Otherwise, they would be back whenever it suited them politically.

Note the assumption here: this is just a political trick, they're only interested in power, they are using this to blackmail America, etc. Now, as these are politicians, I think that's probably not entirely without merit. I remember well hearing some Republican state legislators in a restaurant discussing a bill not in terms of its merits or legality, but in how it would affect their ability to control Democrats and what leverage they might gain.

If I heard that today, I'd go to their table and give them an earful, but I was pretty young at the time and it was just depressing to me. The Post, and indeed the Obama administration, was treating this as a political game, trying to gain the upper hand, like wrestling. The problem is immensely more is at stake.


While political game playing was going on in the House, there also was a strong undercurrent of deep need to cut back on spending. Many of those new legislators were Tea Party candidates who ran on reducing the size and scope of the federal government and cutting spending. Now they were faced with a request by the president to increase the amount of debt the country could go into so it could spend more. They dug their heels in and refused. Absolutely not, this is not why I was elected, they argued.

And here's the problem. This isn't just a philosophical difference, this isn't simply people disagreeing on a topic. This is extremely dire. Monty Pelerin writes at American Thinker:


Credit markets have (or nearly have) stopped US government debt financing. That's why we have the Federal Reserve, the counterfeiter of last resort. If government can raise the debt limit, then it would be legal for the Treasury to issue new debt. The Treasury's sibling, the Fed, would buy it by printing new money. That would allow the government to pay its bills for a while longer.

One must wonder about the intelligence and stewardship of Timmy and the other attendees of this meeting. When Geithner declares: "It would be indelible, incurable. It would last for generations," he is stating the inevitable. Raising the debt limit does nothing to change the US condition other than temporarily postpone his predicted outcome.

Raising the debt limit only puts the government more hopelessly in debt, ensuring that Treasuries will be even more difficult to sell. Without intending it, Geithner admits that Bernanke will be printing money until the electricity is shut off or until hyperinflation shuts everything economic down.

Nobody has the money or even the inclination to buy US debt to help pay it down. Nobody will show up if the nation defaults and has to beg for help, there is nowhere to turn. America has piled its self into unsustainable debt and its getting bigger at a rate of more than a trillion dollars a year.

The only workable option is to reduce spending and reduce that debt. That is the only reasonable choice. But that was utterly off the table for the Obama administration, they didn't even consider that a possibility. They didn't refuse ideas about cutting, they refused to even consider it as an option. Now at this point we're basically to a place where taxes are going to have to go up at some point, that's how badly things have been run.

The problem is, we cannot trust congress with more taxes. If they get more revenue, they simply spend it, they don't pay off anything. We cannot allow congress any more tax revenue until they have proven real, tangible cuts of actual programs, and made them stick. Baby doesn't get dessert until after she's eaten her carrots. Because if she eats dessert, she'll never eat her carrots.

So cuts, real cuts. Not reductions in the rate of growth, not cuts in planned spending, but actual negative movement of spending. And not just in some small areas, but everywhere, with severe, draconian cuts in some areas, or this cannot be sustained. We are literally at a point where the US must cut its spending or be forced to by collapse.

And I have no reasonable hope that will ever take place, not under Republicans, not under Ron Paul as president, not under any political group. I'd love to be proven wrong. When President Bush had a Republican congress in both houses and all the political will he could possibly get he still couldn't get congress to cut a single program. They refused, and simply spent more and more. Because no matter how they campaign and no matter what they say when they are trying to get power, when they get into that seat, they don't want to give it up.

I pray we'll have a government that can make these hard choices, but know that even if we get one, it will be blocked, opposed, stonewalled, and demonized by the press and the party out of power to the point of grinding to a halt. Because for politicians, power trumps right, and for the press, it doesn't even matter what Republicans do, its evil and wrong from the start. Its a kind of treason, really, but that's the situation we find ourselves in.

So we're faced with a situation where eventually this stack of Jenga sticks is one piece away from crumbling completely to the ground. And if you think cutting 10% from Social Security would be terrible for seniors and the needy, think about what happens when it is completely destroyed by economic collapse and totally gone. Your compassion seems a bit less than honest when faced with those choices, my friend.

We'll see those cuts, one way or another. The only question is will they be controlled and on purpose, or total, violent, and forced on us by catastrophe.
Posted by Christopher R Taylor at 7:24 AM

I'm looking forward to reading Woodward's book. I've read a lot of his books over the last few years and I wish there were more journalists like him. I have little doubt that Woodward leans left politically, but he is a master at laying out a scene in objective detail, using pertinent context, and then just reporting who said what. More than any other journalist I've read, Woodward makes you feel like a fly on the wall in the rooms where his reporting takes place... and that's what journalistic writing should be about.