"the law is a ass—an idiot."
-Charles Dickens, Oliver Twist 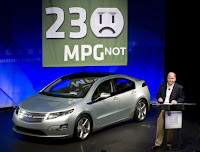 Restaurant chain Boston Market is making a change. They are removing the salt shakers from their tables in the name of health. Mind you salt is absolutely critical for dozens of different biochemical reactions in the human body; without salt, you die. They still have salt available at the beverage counter, so you can get it when you want, its just more difficult. Any good cook knows you salt food when you cook it, but let people season the food to their taste at the table.

Close on the heels of sexual harassment lawsuits, ten agents from the Immigration and Customs Enforcement Agency are suing Janet Napolitano directly. Why? Because they claim that she ordered them to violate federal immigration law.

The suit was filed Thursday in Texas federal court by Immigration and Customs Enforcement officials. It challenges recent directives allowing some illegal immigrants -- particularly non-felons and those who came to the U.S. as children -- to stay and, in some cases, get work permits.

Either change the laws or enforce them as they are. You can have unusual and rare exceptions based on judgment but not by policy. Justice requires even and consistent application of law.

Why is the Occupy movement a problem for the Democrats? Well putting aside the vandalism, filth, disease, rapes, and even deaths in the camps, they have guys like this as part of the movement. Union Activist Mike Goulash recently said at an Occupy meeting:

Goulash is part of the "Progressive Labor Party" which is a maoist communist organization that formed in the 1960s. Americans just love to hear that kind of rhetoric, like they love being kicked in the shins.

British television is more strict than the US, at least when it comes to US-based content and ads. The UK Government has ruled that the latest GM ad for the Volt is so untrue that they have banned it from showing in the area. The problem? Well for one thing it claims the car has a 360 mile range, which is not true, and in lab testing only was true when you use up the gas in the Volt's backup gas motor. Second, the ad implies that the Volt doesn't use gas as opposed to the Ampera, sold by Opel and Vauxhall in Europe; that's not true, they both use gas and electricity. Like most ads, they greatly oversell the efficiency of the car - you'll almost never get the kind of gas mileage they claim in a lab for any car.

Previously, the Obama administration started to insert praise for the president in biographies of previous presidents in a bizarre cult of personality stunt. They made the praises less part of the bios and more a footnote to them, but its still there. Now its been revealed that the State Department has begun issuing "fact sheets" all about what a great guy Obama is in various documents. So far he has not required executive branch employees to refer to him as "Dear Leader."
While the housing market is still in terrible shape, the mentions of a housing recovery have experienced a boom. At Business Insider, they did an analysis of legacy media mentions of the phrase "housing recovery" and came up with this chart: 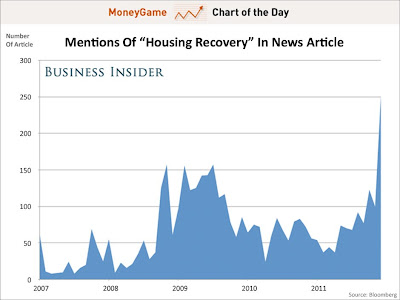 There's not really any such recovery but you wouldn't know that if all you did was look for mentions of it. Boy, I wonder why the press wants to give the impression there's a recovery of some sort going on this year?

Billy Idol isn't as big a musician as he used to be but he's still rocking and I do like his music. He's going to be doing a concert in Seattle, Washington in response to a request by a major fan named Michael Henrichsen. Henrichsen has been trying for two years to get Billy Idol to play on his birthday and finally got his wish. I can't help but think of Jeff Spicoli's wish to have Van Halen plan at his birthday bash.

Gawker recently ran an article all about how we should have a "maximum wage," a point at which people just cannot be paid any more. While its a nice thought to have George Clooney and Bill Gates earn no more than the $5 million maximum wage Hamilton Nolan calls for, its just a really bad idea all the way around. Not only would this tend to depress productivity and work, but it would just be ignored by giving increasing benefits, stock options, etc to employers. And really its none of my business how much money a certain person makes, unless they're stealing it from me directly. Plus, it would drive businesses overseas where they had no such maximum, and besides it would cripple tax revenue, which is earned from wages. Just a dumb, middle-school-level idea.

San Antonio was the sight of one of the dumbest burglars ever. He tried breaking into a Mixed Martial Arts (MMA) gym and robbing it at 3 AM. Except a few of the MMA guys were in there finishing up a late night practice session and they heard him breaking in. So they invited him in for... a chat. They grabbed weights to throw at the burglar and he fled once he saw huge, tattooed guys with metal in their hands, and cops grabbed him soon after.

Somewhat related is this story of a Portland man whose bicycle was stolen. He later spotted a bike that looked suspiciously like his on Craig's List, and since it was a $2500 racing bicycle, he went to get it. It turned out that the bike was really his, and he recovered it from the thief with the local cops helping him out. Except... the cops charged him with suspicion of theft and let him go. At least he got his bike back but this is why thieves exist: you generally get away with it.

Johnny Northside is a blogger in Minnesota who wrote several pieces about a guy he was trying to get fired. The pieces were all true and accurate, but his target took him to court for defamation and libel. The judge in the case ruled with the angry man and ordered the blogger to pay $60,000 in damages. Which is utterly ridiculous, because the truth is an absolute defense in American law since the early 1800s. A later court overturned the case, ruling that you can say whatever you want in a blog, if its true. The defamed man in question worked for the government, which probably helped him with the initial court case.

Hate Crimes are a ridiculous category to begin with, but cases like this demonstrate how their absurdity is more than an abstract problem of definition and consequence:

It's being investigated as a hate crime -- someone scattered pieces of bacon over the New Dorp Beach field where the borough's Muslim community celebrated the end of Ramadan Sunday morning.

Every month in the summer Phoenix holds a "first friday" festival downtown with events and vendors. The temperatures soared up to 112 degrees, and a Christian organization visited the area with water bottles and started handing them out, for free. They were willing to talk to people about their faith, but were there mostly just to help thirsty people beat the heat. They were descended upon by officials who ordered them to stop, because they had not purchased a license to be vendors at the event. The real reason they were approached by authorities? Local shops and the event booths had drinks for sale, and if you give away water, that hurts their bottom line, damn it.

Recently an organization studied 50 years of books and discovered that the standard use of male pronouns (he, his, him) were being replaced more and more by feminine ones. In the English language, male pronouns are generic. When I say something like "in most cases, returning lost goods will make him happy" it doesn't mean that necessarily mean a guy, it means "a person." In the 70s women suddenly decided this generic use was offensive and demeaning to women, and so more and more books are using female pronouns.

The D&D rulebooks, for example, use all feminine pronouns as generic in every instance. This is jarring to me, since I think it means a woman rather than a generic person - and I'm hardly alone in this. While eventually this might become standard and just normal to represent generic humanity with feminine pronouns, it isn't right now. And if its demeaning and offensive to use male, why is it okay and proper to use female? Why make that change to begin with?

Throwing a birthday party? If you're in Virginia, you might want to get a permit first. Martha had a ten year old birthday party in Faquier County, and since she didn't get a special events permit, the farm has been fined. The county found out about the birthday party through Facebook and fined the farm where she had it. They also fined the farm for selling produce directly to visitors without going through a market. Why? Because they want more control and you to have less liberty. This is one of the reasons the Tea Party movement got started.

Anders Breivik stated in court that he was sorry, apologizing to radical nationalists that he... hadn't killed more children in his murderous attack that claimed 77 lives. The court put its foot down, sentencing the man to a massive 10-21 years in prison, the maximum allowable sentence in Norwegian law. In theory, the state can extend the sentence if they decide a convict is a danger to society, so its likely he'll spend more time than that in prison... unless Norway's culture continues to decay and becomes even more permissive of crime.

There has been a shooting at the Empire State Building today, with two dead, including the shooter. Unfortunately, several others were wounded, and initial reports suggest that at least some may have been injured by the police. Its amazing that all these no-gun, high gun control areas keep having shootings, its almost as if these laws don't stop murderous monsters who want to shoot people, or something.

Portland is also the scene of an apartment building which has a strict no-pets policy. A woman living there was told she should get a dog for therapy for her depressed and anxious child, and so she tried to get it into her apartment, but the owner pointed to the contract and the apartment's policy. She responded not by moving, but by suing the apartment complex and won, getting a $75,000 judgment against the building. Look I'm all for getting a kid a pet, but move where they're allowed with all that money you spent on court costs.

According to one of the members of the US cycling team who was busted for using drugs, his former teammate Lance Armstrong used to do so all the time. Continually tested, particularly after winning so often, Armstrong never once was caught using any illegal techniques or chemicals, but on this man's word, his 7 titles are being removed by the US Anti-Doping Agency. Did he cheat? I don't know, maybe. But I would be a little more reluctant to take the word of one angry guy who got caught.

President Obama supposedly has almost 19 million followers on Twitter, but according to a recent study, over 40% of them are fake. Fake accounts are usually advertising tools, not meant to have any followers but to send ads and information to people they follow. Still, 9 million is quite a few. That says more about how Twitter works and what advertisers are up to than anything about the president.