"Ha! Typical Republican! Wait, who did it?" 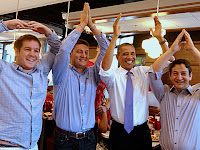 There's a picture going around showing President Obama goofing with some other guys at what looks to be an airport, doing hand signs to spell out OHIO. Except, the I and H are reversed, so it spells OIHO, and the president's H looks more like a U to me. This isn't anything significant except for a couple of thoughts.

First, they spelled it properly from their perspective. If you're looking at their backs, it spells OHIO. And that's how they'd perceive it, basically as if they are looking over their own shoulders. Its like this: if you have your hair parted on the side, which side is it parted on, left or right? You look in a mirror to see yourself, and you see it backward. Its actually parted on the opposite side. Its just one of those perception things, you see things from inside you, not from how people see you as they face you.

The other thought is that while this is just harmless fun... what if a Republican presidential candidate had done it? Especially one with the last name "Bush?" Imagine if Sarah Palin did this and the picture was all over. PROOF she's a retard. PROOF Republicans are unserious and stupid. PROOF they don't know anything. And besides, why is the president doing this, it shows a lack of dignity and gravitas!

And Republicans all over America would be embarrassed and condemn it too, just to feel like part of the crowd. Yeah you're right, that's stupid, you like, me right?
Posted by Christopher R Taylor at 7:54 AM