"Look, John's last-minute economic plan does nothing to tackle the number-one job facing the middle class, and it happens to be, as Barack says, a three-letter word: jobs. J-O-B-S, jobs."
-Vice President Biden 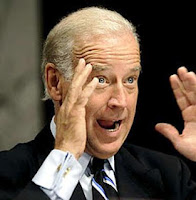 There used to be a time I was able to predict political and electoral outcomes comfortably and confidently. I could always tell where the culture was going and why, and had no problem seeing the next stage. I've since given that up since the world just doesn't make much sense to me these days and I keep getting it wrong.

That said I do have a sense that something some people are predicting is not going to take place. President Obama, they say, is going to dump Vice President Biden for another candidate - usually Hillary Clinton (although I've even read John McCain(!)).

The reason this comes up is because Biden is a pretty goofy, unstable gaffe machine, an embarrassment for the Obama administration. And since things aren't going as well as they probably would have hoped at this point in the polls, some think its time for him to go.

Well the VP candidate has to be locked in by the convention, and that's about 20 days from now. So that's a pretty small window. And I don't see it happening, although I could be wrong, as I said.

I do understand the thought process behind this prediction. Biden has for his whole career said loopy stuff and been basically a goofball. And lately it seems like he's getting worse. Almost every time the guy opens his mouth he says something stupid or crazy. From telling a crippled man in a wheelchair to stand up to greeting states by the wrong name, telling a black audience that Republicans and banks want to return them to slavery (in a really awful Southern accent), describing Obama as special because he is a 'clean and articulate' black man, the list goes on and on.

I suspect the push by Sarah Palin, Rudolph Giuliani and others is more strategic than any real effort to see Biden out of the way. Its a safe, easy way to criticize the Obama administration without targeting Obama. If Biden is such a worthless lunatic that people are calling for him to retire from politics entirely, that doesn't reflect well on the president who picked and supports him.

I don't see it happening, though, for several reasons.

First, President Obama is a very, very, very egotistical, arrogant man. He seems pathologically narcissistic, and under no circumstances does he view himself as mistaken. Obama repeatedly has praised Biden and was involved in that pick for vice presidential candidate. Tossing him now would be admitting a mistake, that he has been wrong all along, and that strikes me as exceptionally unlikely.

Second, at this late a stage, dropping Biden would send a signal of desperation, incompetence, and inability. Had Biden announced his retirement, say, last year that would have been okay timing but now it would just seem incompetent, weak, and frightened. And no campaign wants to send that signal.

Third, Biden isn't newly goofy, he's always been that way, and they picked him on purpose in 2008. And it didn't hurt them a bit. Biden had already made jokes about not understanding Indian cashiers at the 7-11 and other things before he was selected for VP in 2008.

Fourth, although most people in the middle and right see Biden as sort of a crazy uncle who tells disjointed irrational stories and keeps embarrassing you in public, many on the left think he's a genius of foreign policy. Skimming the left's blogs you can see commenters think the recent push to get Biden out of the way is out of fear that he'll destroy Ryan in the debates. They really think he's that smart and that capable.

So I just don't see it happening. And as I've said in the past, even if it did, I don't see Hillary taking that job. I don't get the terror of this woman in any case, she's just not the political juggernaut that people think. In 2008 she was steamrolled by a total neophyte incompetent in the primaries. She's done a terrible job as Secretary of State. And while its unfair, appearance does matter and her shrieking voice grates on people, while lately she looks like she's just given up on her appearance. Women do not age as well as men, and that matters a lot in politics.

And honestly I think the Clintons do not care for President Obama at all. He robbed them of another term in the White House. I suspect that Bill Clinton at least is not all that far off policy wise from Mitt Romney on a lot of issues, and he's already said he likes the guy. I wouldn't at all be surprised to see a Clinton endorsement of the man in October. So no, even if somehow they did toss Biden, I just don't see Hillary taking the job, and even if she did I don't think it would help them much.

Of course, I didn't see any situation in which Hillary Clinton would be in Obama's cabinet, either and she took the Secretary of State job, so like I said, life used to make more sense to me in the past.

But I do honestly think that Biden (and Pelosi) are getting too old to stay in office and are showing genuine signs of age-based dementia. I don't mean that as an insult, its a very sad thing to watch and I want them to get out of politics and away from cameras to somewhere quiet they can get the help they need.

Its just too bad we live in a culture where someone like Biden is revered as a foreign policy genius and Dan Quayle or Sarah Palin are forever caricatures held up for ridicule.
Posted by Christopher R Taylor at 8:51 AM