THE STATE OF MODERN FEMINISM

“I need feminism because on the women’s website I write for, too many men comment to tell me I’m wrong.” 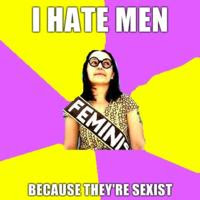 One of Rush Limbaugh's "undeniable truths" is that feminism was created to give unattractive women equal access into society. Like much of Rush's rheteoric, its both largely true and largely misleading. Feminism originally was meant to combat the patronizing treatment of women and open up culture to more female access. Now, not so much.

In an effort to combat the stereotypes people have of feminists, a website was set up where real feminists could post a profile about themselves and why they became a feminist. The Duke University site's mission statement says:

Identify yourself as a feminist today and many people will immediately assume you are man-hating, bra-burning, whiny liberal. Perhaps a certain charming radio talk show host will label you as a “Feminazi” or “slut.” Even among more moderate crowds, feminism is still seen as too radical, too uncomfortable, or simply unnecessary. Feminism is both misunderstood and denigrated regularly right here on Duke’s campus.

We, the 16 women of Professor Rachel Seidman’s course on Women in the Public Sphere, have decided to fight back against these popular misconceptions surrounding the feminist movement. Our class was disturbed by what we perceive to be an overwhelmingly widespread belief among students that today’s society no longer needs feminism. In order to change this perception on campus, we have launched a PR campaign for feminism. We aim to challenge existing stereotypes surrounding feminists and assert the importance of feminism today.

What are the stereotypes of a feminist? Well... as the blog Dalrock points out, just look at the profiles on the site. That's right, the site ends up confirming exactly what it was set out to dispel.

First up is Leah, and she is here to destroy the stereotype. Leah needs feminism because:

I need feminism because I shouldn’t need a reason for not shaving my pits (I’m not making a statement; it’s just more comfortable).

Next on our tour of enlightenment is batmanisreal. She needs feminism because she looks like a man. Her poster reads:

I need feminism because I am a woman, even though I may not look like society’s version of a woman.

Ugly, check. And this is what Rush was talking about. Sure its not fair that society tends to shut out ugly people. Guys face this too, handsome guys have a much easier time of life than ugly ones. Feminism wants to remove that, at least the modern version, and only for women.

Down the list it goes. Women complaining that they are criticized for not being logical and being too emotional. Women hating men. Women hating themselves. Women who are lesbians. Women with small breasts. Women who want to act like sluts without consequence.

That's exactly the stereotype people have of modern feminists Men hating she-beasts with hairy bodies who can't think rationally. The site is meant to combat this and simply confirms it. And the thing is, this isn't open source, they carefully select and screen each profile.

Its almost as if the entire site is gag by some frat boys to make feminists look bad. But it isn't, they're very earnest and sincere.

Look, the original effort to fight for women wasn't all wrong, in fact it was mostly right. Sure, it was totally infected with leftist lunacy and hippie mentality, but there really was a problem for women in western culture.

But today? Feminists got what they wanted. They won, they achieved their goals. If there's ever been a successful movement on the left in America, its the feminist. But they didn't stop with victory. Like so many of these organizations, they were faced with a choice: declare victory and stop or invent new reasons to fight and keep that sweet cash flow going. And they went with the latter.

So now there are feminists arguing that the world is sexist because there aren't enough women firefighters while defending Muslim women being forced to wear a shapeless black bag, not drive, and be beaten without cause or defense. Most young women you talk to today will say they are feminist but utterly reject and even loathe the modern feminist movement. Organizations like NOW hardly even represent the dwindling few members, let alone women at large.

Look around you on the street or at work. There are feminists all over. Just not modern feminists. Not NOW members, not the kind of horrible freaky people who declare themselves proud members of the modern movement. And that's why when people argue that feminism isn't done and has to keep fighting, this is what they argue about: why can't I have hairy pits without the other girls picking on me? Why can't I get a date, its not fair!!

For the record: don't shave if you don't want to. What do I care? Just don't whine when someone does care, that's part of being in a society.
Posted by Christopher R Taylor at 8:40 AM

I lived a few years in Germany some 30 years ago and it was common for women not to shave pits or legs. It never bothered me. I wouldn't do it to myself and I'm not sure how they got conned into it, but as a rationale for embracing "feminism" it's weak tea.
Like many of these movements feminism drifted from a legitimate desire for self-actualization and individuality to locking its acolytes into a rigid catechism of proscribed beliefs and behaviors. Its become the antithesis of what it set out to be.
HK